A Failure of Imagination

Ever wonder why it's called "Greenland"? One explanation is that it was marketing: If we call it "Greenland", we can fool people into coming here.

This is pretty unsatisfying. Never mind the fact that you'd likely end up with a lot of people unhappy with you this way, why would you want to start a colony on a glacier?

The Viking expansion to Greenland (and soon after, to Labrador) happened in the tenth and early eleventh centuries. There were plenty of other opportunities for overseas expansion than sitting on a glacier - King Knut conquered England and ruled there from 1017 until his death in 1035. Normandy in France gets its name from the North Men, who conquered it in the ninth and tenth centuries.

Another explanation for Greenland's name? Maybe it was green.

Both my long term readers know that I'm a bit skeptical of the theory of Anthropological Global Warming (AGW), and I've explained Why I'm a Global Warming Skeptic. The biggest reason is that it's been much warmer in the relatively recent past: the Medieval Warm Period, between around 800 AD and 1300 AD.

Source: Newton et al., Geophysical Research Letters.
Note that the time scale on the graph reads backwards - the most recent date is on the left, and the oldest is on the right. The data is not from the north Atlantic, but rather from the Indian Ocean, but demonstrates that global temperatures were not just warmer then, they were significantly warmer.

In other words, Greenland probably was green.

The current AGW models do not explain why this happened - they don't predict the historical record, and so I'm pretty unconvinced that they're predicting what's happening today. And just so you don't think I'm playing games with the time scales to make a point, here's NOAA (the US weather agency) showing climate back to 150,000 years ago: 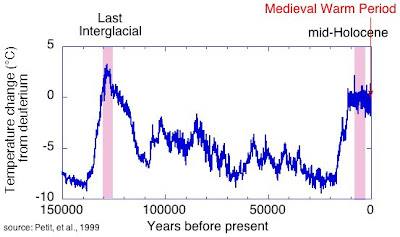 Much, much warmer around 130,000 years ago. Can't blame SUVs for that. The current models don't explain this, either.

But this isn't my point, which is about why you don't find Vikings in Greenland any more, and haven't for over 500 years. The Medieval Warm Period ended abruptly - in the space of one or two generations, around the late thirteenth century AD. This wasn't a happy time for just about anyone, as cooler and shorter summers led to a series of crop failures. Famine led to pestilence, and the other horsemen all came to party. Think Black Death. The historical record is filled with this - Barbara Tuchman's A Distant Mirror is the must-read source for the story of how a third of the population between the Indus river and Iceland simply died out.

Throughout history, most people have lived one or two bad harvests from disaster. The Seven Lean Years follow the fat ones, and lean doesn't mean "we'll all lose those few unsightly inches around the waist", it means that your kids would die, your parents would die, and maybe you would die.

The Medieval Warm Period was followed by what was known as the "Little Ice Age" - 4 centuries of global cooling that were simply catastrophic. Glaciers devoured villages in the Alps, it got so cold that the American Continental Army moved cannon south from Fort Ticonderoga over the frozen Hudson river, and the Vikings in Greenland starved to death. Jarred Diamond describes the scene in Collapse:

The animal bones in those topmost layers tell a grim story. They include: foot bones of small wild birds and rabbits, which would normally have been considered too small to be worth hunting and usable only as last-ditch famine food; bones of a newborn calf and lamb, which would have been born in the late spring; the toe bones of a number of cows approximately equal to the number of spaces in that farm's cow barn, suggesting that all cows had been slaughtered and were eaten down to the hoofs; and partial skeletons of big hunting dogs with knife marks on the bones. Dog bones are otherwise virtually absent in Norse houses, because the Norse were no more willing to eat their dogs then we are today. By killing the dogs on which they depended to hunt caribou in the autumn, and by killing the newborn livestock needed to rebuild their herds, the last inhabitants were in effect saying that they were too desperately hungry to care about the future.

Gone, victims of climate change. The current climate models don't explain this, either.

This all has a point, which is that there is a massive failure of imagination happening today. The orthodoxy is that the climate is getting much warmer, much faster, and that it's man's fault. The orthodox don't talk about how lately it's been getting colder, and may be getting much colder:

For the second time in little over a year, it looks as though the world may be heading for a serious food crisis, thanks to our old friend "climate change". In many parts of the world recently the weather has not been too brilliant for farmers. After a fearsomely cold winter, June brought heavy snowfall across large parts of western Canada and the northern states of the American Midwest. In Manitoba last week, it was -4ºC. North Dakota had its first June snow for 60 years.

None of this has given much cheer to farmers. In Canada and northern America summer planting of corn and soybeans has been way behind schedule, with the prospect of reduced yields and lower quality. Grain stocks are predicted to be down 15 per cent next year. US reserves of soya – used in animal feed and in many processed foods – are expected to fall to a 32-year low.

Who knows? Maybe ten years from now, temperatures will go higher. Maybe we will see the seas rise an inch over the next 100 years. But a lot of people in the third world will die if things stay cool. Even today, most of the world lives only a few bad harvests from hunger. A horribly misguided ethanol-fuel program is making things worse.

So why the focus on warming? Failure of imagination. Unless its an Intellectual Class that can imagine itself in charge of the whole economy, by ginning up a "crisis" while people starve.

Hat tip and thanks to Don, who pointed out the Telegraph article via email.
Posted by Borepatch

So, you're one of those deniers. Al Gore warned me about people like you.

I had always heard that the names given to Greenland & Iceland was a cool trick by those crazy Viking monkeys to make folks go to the crappy place- Greenland is ice, & Iceland is green. Prolly not a lot of truth there, I’m guessing.
They are both about the same latitude (partially), so you’d think they’d have similar climates, no? Hmmmm, no, I guess not…

Annnyway, the only ethanol program that is worth its’ salt is the one where corn is converted to corn whiskey, & fed to me, not motors.

You both caught me! Those rotten neighborhood Deniers are out on my lawn again ...

I recently found your blog, and enjoy it very much... Particularly liked this post.

I appreciate you including a link to your older post on the same topic -stuff like this really interests me.

Terrific post, which I'll mar with only a few comments.

Last year, the narrative was Global Warming, suddenly it's now Global Climate Change. Seems like someone is hedging their bets. The problem with the frantic urge to DO SOMETHING is that we might end up doing the wrong thing.

I also recommend "Fallen Angels" by Jerry Pournelle and Larry Niven. It's scarily prescient, even though it was written in the 1980s.

The planet has generally been colder than it is now, the relatively brief warm periods, such as the one that seems to be ending now, are marked by rapid advancements in civilization, better health, and a higher standard of living.

As with gun control, this is about control, not solving the putative problem.

Paladin, thanks for the kind words. My older posts are categorized. The "Junk Science" one has a lot more like this.

TOTWTYTR, thanks. And thanks for the History Channel pointer. #2 Son and I watch a fair amount of that, and this one sounds right up our alley.

Sadly, I have to agree that it's about power and control. If the Left were more than just appetite, I might still count myself as one.

BP, you're welcome. You can help me out by not blogging about stuff before I can get to it. And not doing better job at than I could ever think of doing.

The reason for the emphasis on "Warming," is so they can turn up the heat. Cooling is much more dangerous and final.

Borepatch,
See the following report put out recently by groups of renown scientists in response tot eh flawed IPCC report that m ost, if not all glowball warming "science" quoted come from. It puts the lid on modeling, data sources, and analysis of the results of both.