Patsy Cline - I Fall To Pieces 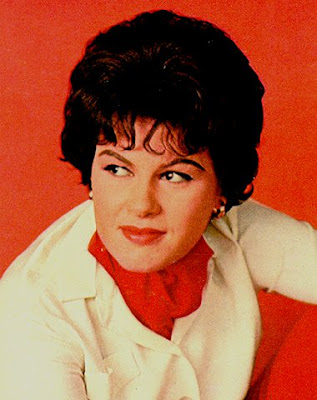 First is a good word to describe Patsy Cline. The first woman inducted into the Country Music Hall of Fame. First on CMT's The 40 Greatest Women of Country Music. First in the Guinness Book of World Records for most weeks on the charts for a female star, in any music genre (722 total, 251 at #1).

She only made it to #11 on VH1's 100 Greatest Women of Rock and Roll. I think it's because she died so young, and so long ago. VH1's judges were still in diapers, if they were born at all.

First female country star to have major crossover success. Crazy reached #2 on the Hot Country Chart and #9 on the US Hot 100 and #2 on the Adult Contemporary Chart. All at the same time.

Not bad for the daughter of a seamstress, whose blacksmith father ran out on her mother. Her untimely death in a plane crash - leaving a husband and two small children - gives pause, to wonder what her career might have been had she lived out her full allotment of years.

Her style was completely new. Rather than the traditional female country style of gingham dresses and warbling vocals (and backing up the country men-folk), Cline brought sophistication, with her sultry contralto and cocktail dresses. Another first, she was the first female country star to sing at Carnegie Hall. Dorothy Kilgallen wrote in her column The Voice of Broadway of the "hicks from the sticks."

I Fall To Pieces is perhaps her signature song. Initially ignored by country radio, it broke out of the doldrums on the pop charts, and moved back to country. It made her reputation, and for good reason. It reached #12 on the pop charts, and #6 on the adult contemporary charts. It peaked at #1 on the country charts, her first number one hit.

I Fall To Pieces (Songwriters: Hank Cochran and Harlan Howard)

You tell me to find someone else to love,
Someone who'll love me too, the way you used to do.
But each time I go out with some one new,
You walk by and I fall to pieces.

You walk by and I fall to pieces.