At State U, I studied Electrical Engineering (among other things). One thing that we studied was frequency hopping radio, which is a cool way to make your conversation hard for someone to eavesdrop on. It works kind of like this:

You and I both tune our radios to a particular frequency, say WRDK-Redneck FM. I speak the first word of the sentence, "Lever".

You and I both tune our radios to a different drequency, say WLTE-Lite FM. I say the next word, "guns".

We tune to a third frequency, for a third word "are", then a fourth "sweet."

If the adversary doesn't know the order of frequencies and the timing of the changes, he'll never know our secret: Lever guns are sweet (unless he reads this blog, of course).

What I didn't learn at State U was who invented this technique, and got a patent from the US Patent and Trademark Office: Hedy Lamarr:

The idea was ahead of its time, and not feasible owing to the state of mechanical technology in 1942. It was not implemented in the USA until 1962, when it was used by U.S. military ships during a blockade of Cuba after the patent had expired. Neither Lamarr nor Antheil, who died in 1959, made any money from the patent. Perhaps owing to this lag in development, the patent was little-known until 1997, when the Electronic Frontier Foundation gave Lamarr an award for this contribution.

From the EFF's award:

Actress Hedy Lamarr and composer George Antheil are being honored by the EFF this year with a special award for their trail-blazing development of a technology that has become a key component of wireless data systems. In 1942 Lamarr, once named the "most beautiful woman in the world" and Antheil, dubbed "the bad boy of music" patented the concept of "frequency-hopping" that is now the basis for the spread spectrum radio systems used in the products of over 40 companies manufacturing items ranging from cell phones to wireless networking systems. 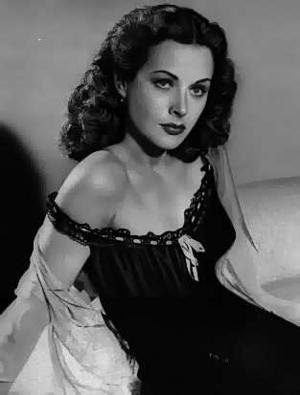 Pretty darn impressive, especially given how open the 1940s scientific community was to contributions from women.

And so, I hereby pledge my allegiance to Hedy Lamarr:

You didn't know about this? Really? I thought that it was pretty well known among geeks and geek wannabees like me.

She was a remarkable woman. She also invented modern plastic surgery.