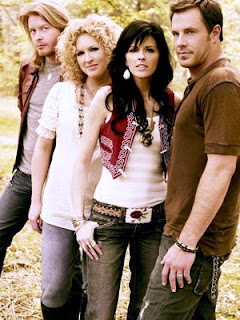 Country music is not shy to celebrate its roots. People are proud of where they're from, and aren't afraid to say so.

Little Big Town does this particularly well, with their four-part harmonies and up-temp scoring. The band is interesting in that there is no lead singer: each of the four members takes a turn singing lead.

Little Big Town is more Country than much of the new pop-influenced Country songs on the current charts. The harmonies give them a unique sound which can cross over even to people who don't much care for Country.

Boondocks was the first of three songs from their platinum selling album The Road To Here to make the Billboard Top 10 Country song chart.

And I can taste
That honeysuckle and it's still so sweet
When it grows wild
On the banks down at old camp creek
Yeah, and it calls to me like a warm wind blowing

It's where I learned about Jesus
And knowing where I stand
You can take it or leave it, this is me
This is who I am

I keep my heart and soul in the boondocks

You get a line, I'll get a pole
We'll go fishing in the crawfish hole
Five-card poker on a Saturday night
Church on Sunday morning

You get a line, I'll get a pole
We'll go fishing in the crawfish hole
Down in the boondocks
Five-card poker on a Saturday night
Church on Sunday morning

Realy love that song, makes me long for the things from my youth.