A while ago, I posted about what's going on with higher education costs. My post was speculative - lots of opinion, not much fact:

Just as with home ownership, both federal and state policy encourages University attendance. The question is, does this bring people to the education market that really shouldn't be there? We've all heard about low income people who got $500,000 mortgages; is there a low income kid at Harvard majoring in Medieval Literature?

So how about some facts? How do higher education costs compare, say, with inflation? Or average family income? Health care? What do they look like over a period of decades?

According to Jam Today, the data is not good to higher education: 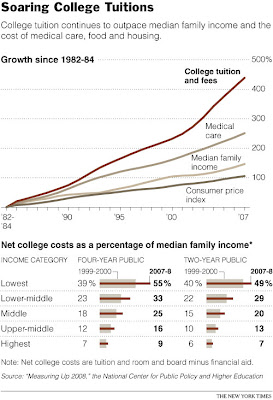 This graph is interesting because it goes right back to around the time that I graduated from State U. Prices have roughly doubled since then, and median family income has increased modestly beyond this. University education costs have not quite quintupled.

Things are much worse than my idle speculation had suggested, and "bubble" seems to be precisely the correct word:

In a post published earlier today, John Robb claims that as “there is reason to believe that costs of higher education (direct costs and lost income) are now nearly equal (in net present value) to the additional lifetime income derived from having a degree…this situation has all the earmarks of a bubble. A bubble that will soon burst as median incomes are adjusted downwards to global norms over the next decade.

3. Net Present Value Analysis is your friend if you're thinking of going to college. NPV analysis is the process of adding up all the costs of a project, adding up all the benefits of a project, adjusting for inflation, and seeing what Rate of Return (RR) you have. This is instructive, because you can compare the RR against the interest rate on the student loans. If the RR is less than the loan rate, you have a bad deal. The problem is figuring out what you'll be paid as a Russian Literature grad.

As it turns out, it's hard to figure out what an individual Russian Literature grad will make. It's not hard at all to measure what the average salary of all the Russian Literature grads are. Jam Today has a fascinating post on alternatives to the current system that will rapidly emerge if the Academy is indeed extracting essentially the entire financial value add of a degree.

It doesn't discuss the politics. I still think that the impact will be brutal, as the population discovers that the leftist education establishment is no different than a loan shark. And a loan shark that is not above stooping to use governmental coercion to enforce load payment:

Nor can you default, trash your credit, go bankrupt, and recover in time for your 30th birthday. Lenders, and Congressmen, foresaw that this strategy might become attractive. So you cannot discharge student loan debt in bankruptcy. That's right--if you don't pay, they'll eventually garnish your social security checks.

Boy, for a bunch of Trotskite lefties who hate everything about the Capitalist system, those professors sure are good at squeezing every penny out of their pupils. I'm sure that they have a very intelligent justification that shows that they're nicer than we are, though.
Posted by Borepatch

Oh, ouch.
I loved my tiny liberal arts college, but there are days when I seriously question my decision to take on $35K of loans, instead of going to the local university for free!

This presents an interesting conundrum for students. Go to college and wind up owing huge amounts of cash, or don't go to college and have your employment options somewhat limited.

Further complicating this the rise of "diploma mills" which devalue degrees from all but the most prestigious universities.

It will be interesting to see what the landscape looks like in about 10 years when it becomes relevant to my kids.

Bubble would seem to indicate that once burst, that prices will go down as schools fight for students. However, look at Harvard. Their endowment is so large they don't need to charge anything for admission, yet they do.
I'd expect, and a news article this week confirms, that they will contine to raise tuition to make ends meet, even when attendence falls.
How hard is it to fire teachers you no longer need due to falling attendence?

Overload, you raise an interesting point. I'd suggest that Harvard also has brand working in their favor: they attract students from all over the world, based on their reputation. Since there are ten times as many applicants as they have space for, this would bid up their price (at least as long as they maintain their brand).

There are a few other schools in the same class: Yale, MIT, Stanford, Oxford, Cambridge, a few others.

Not a lot in this class, though. The rest of the schools will be squeezed from the top and from the bottom (on-line learning, Univ of Phoenix, etc).

And it's still hard to see how a Harvard Medieval Lit grad would make more than a Harvard computer science grad.