How do you say "Merry Christmas" in Czech? 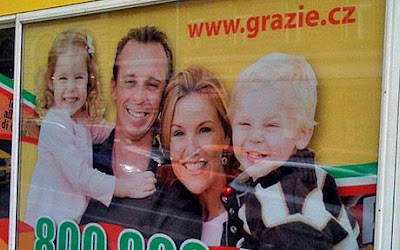 Jeff and Danielle Smith sent a photo of themselves with their two young children to family and friends as a Christmas card, and posted the image on her blog and a few social networking websites.

Then, late last month, a friend of Mrs Smith's was driving in his neighbourhood in Prague when he spotted the Missouri family's smiling faces in the window of a local supermarket. He snapped a few pictures and sent them to a flabbergasted Mrs Smith.

Mario Bertuccio, who owns the Grazie store in Prague, admitted that he had found the photo online. He said he thought it was computer-generated. When told it was a real photo - of a real family - he promised to remove it.

Bravo to Signor Bertuccio for doing the right thing, although he really should have known better - and the "I thought it was computer generated" doesn't really pass the sniff test.

There's a lesson here - assume that whatever you post to Al Gore's Intarwebz will be used in ways you don't anticipate.
Posted by Borepatch

I read about this, but seeing as this guy has used these this nice family snap commercially, he should pay them some money. I'm quite surprised they haven't sued him already, LOL.

I used to have pictures of myself online about 5 years ago until I saw someone steal a photo of a woman and her kid and post it in a forum saying it was her. A person who knew the woman from the original photo alerted her to the fact that someone was impersonating her on that forum. I've seen some other strange stuff, so it makes you quite cautious online.