Something relatively new in the "trolling for suckers" playbook that the Bad Guys love so much is fake antivirus. You get a popup designed to look like an antivirus scanner. It helpfully tells you that your computer is filled with spyware (ick ick ick) and you need to download this helpful free antivirus to get all better. Right. NOW. 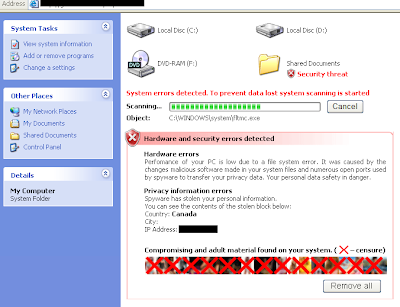 Of course, it's not an antivirus, it's malware, and you just let it on your system. If you ever see anything like this, kill it (click on the "X" in the upper right hand corner of the window). Nothing (good) to see, move along.

The page is a fake, designed to look real; it's not. It's quite fun to see this Windows simulacrum pop up on a Linux system (and no, I was not looking for grumble flix, thank you for asking). I'd imagine that it would be pretty funny to see all this "Windows" activity on a Macintosh, as well. Dude! Ur Mac's D: drive haz viruses!!!!1!!one!