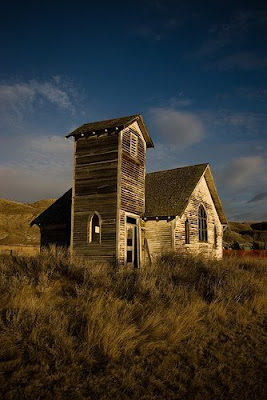 In the unlikely event that a European stumbles across this blog and joins my two regular readers, my advice to him is to visit the "flyover" country if he really wants to understand America. The spaces are huge, and (mostly) empty.

But the emptiness contains the ghosts of lost dreams.

There is a restlessness to the American soul that is best captured by standing in the main street of a Ghost Town. Where once people built lives, nature is triumphant. It's pretty astonishing just how fast a house will fall apart and disappear into the landscape without someone to keep it up.

I remember in 1972, visiting my great-grandfather's farm in Kansas. The old farmhouse where my father lived during the summers when he was a boy was nothing but boards. In thirty years, reduced to a pile. Thirty-five years later, even that will be gone.

Here used to be life, and love, and dreams. All gone.

There's nothing to compare with this in Europe, except for civilizations long dead and peoples vanished. But ours is not dead, and out people are not vanished, just moved on to greener climes and newer dreams.

The American (and Canadian) west is filled with Ghost Towns. The GhostTownGallery has a list of them, if you want to pick one to visit. 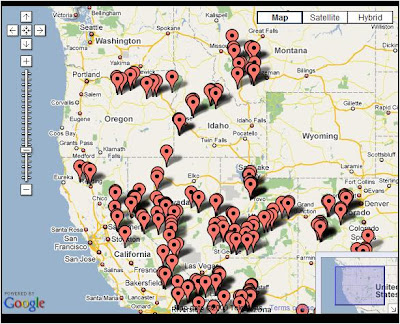 The government looking at expanding a pioneering scheme in Flint, one of the poorest US cities, which involves razing entire districts and returning the land to nature.

Local politicians believe the city must contract by as much as 40 per cent, concentrating the dwindling population and local services into a more viable area.

Not dead, but dieing. The silver's run out, the mine is boarded up, and the prospectors have moved on.

Flint, sixty miles north of Detroit, was the original home of General Motors. The car giant once employed 79,000 local people but that figure has shrunk to around 8,000.

Unemployment is now approaching 20 per cent and the total population has almost halved to 110,000.

The exodus – particularly of young people – coupled with the consequent collapse in property prices, has left street after street in sections of the city almost entirely abandoned.

All that's left are those too old to pick up and move again, or those too sentimental.

Europeans build with stone, or brick. Americans build with wood. Expectations inform actions. Blut und Boden vs. Home is where the heart is. Here, the landscapes of the mind are what's durable.
Posted by Borepatch

I think a lot of coast-huggers could use some time out in "fly-over country" to gain some perspective. I'm willing to bet less than half of the people advocating the return of natural prairie and free-range have ever been out here.