The worst machine gun of all time

All rage and disgust all the time makes Borepatch a boring blogger. So let's all relax with some mockery, courtesy of the late, great Ian Hogg in his excellent The Illustrated Encyclopedia of Firearms:


A French light machine gun, taking its name from a Col. Chauchat, president of a design commission which developed the weapon in 1914. It was undoubtedly the worst machine gun ever issued to any army at any time in history. The basic design was sound enough, if unusual; it was a 'long recoil' (qv) weapon in which the barrel and bolt recoiled, locked together, for a distance greater than the length of a complete round of ammunition. At the end of this stroke, the bolt was unlocked and held, while the barrel was allowed to run back to the firing position. As the barrel came to rest, it released the bolt, which then ran forward, chambering a fresh round from the semicircular magazine beneath the gun. But while the design was sound, its execution was cheap and slipshod, the gun being made from stamped and turned components with excessive tolerances, much hand-fitting of parts, and absolutely no interchangeability of spares. It was unusual for a gun to achieve more than two short bursts before jamming, and when this happened it invariably had to be completely dismantled to rectify the stoppage.

Nine American divisions were armed with the weapon, and it has been estimated that fully fifty percent of them were thrown away after their first stoppage.

How bad was this? The gun was so filled with fail that troops under fire had a tossup chance of throwing them away. 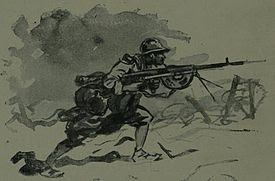 What's amazing is that the French made a quarter million of these 20 pound boat anchors.  Dudes ....

The American Army, of course replaced these with the Browning Automatic Rifle, designed by John Browning himself (PBUH), and therefore entirely reliable. To get that much suck in a single package, it seems you need a French Army Committee to design it.
Posted by Borepatch

Thus proving that excessive tolerance in the wrong areas can be disasterous.

It is a French firearms design tradition. I have a copy of the military record showing that my great grand daddy's French pinfire revolver was "lost on the march" during the civil war. Thrown into the woods is more like it. He took a hit to his paycheck rather than go into battle with the pos.

The irony of it all is that the Chauchat as designed was not inherently a bad gun.

(Let's not forget that Ian Hogg is the same small arms guru who describes the 1911 as having a monstrous recoil making it suitable only for the hardiest of he-men...)

The Chauchat was actually a good twenty years ahead of its time, being a portable automatic rifle designed to be manufactured and assembled cheaply and easily from tubing and stampings.

The problem is that production was then farmed out to France's largely-idled bicycle industry, which consisted of non-automated, hand-fabricating cottage shops.

As a result, no two shops fit their guns up exactly the same and parts interchangeability was... iffy.

Further, the ones issued to US troops were chambered in .30-'06. I won't bore you with a bunch of dull gunsmithery and technicalese, but a gun that was originally designed to feed a moderate-pressure, heavily-tapered, rimmed cartridge from a box magazine (hence the complete half-moon shape: the 8x50 Lebel round is shaped like an incense cone) is not going to work well with a longer, straighter, rimless round of much higher pressure. How well do you think the Garand would work if you did a hasty conversion to 7.62x54R?

Lastly, anyone talking smack about French small arms design, especially in the period between 1840 and 1920, is demonstrating that they... well... don't know much about the history of small arms. The French were using bolt-action breechloaders while our g'g'granpappies were still stuffing Minie balls in the wrong end of the gun. (Hey! "Minie ball"? It's almost like "Minie" was some French guy's last name!)

Huzzah to Tam for the dose of reality!

Just wanted a subject other than riots.

Also worth noting (from Wikipedia, FWIW):

"In the muddy trenches of northern France several operational problems came to light. Most of these were a side effect of the economical construction and in particular of the open-sided, semi-circular magazines. Those allowed for the ingress of dirt and were the cause of 2/3 of all stoppages."

Mud and dirt in the action will stop up just about any auto-loader, I would think.

"Period reports, soldiers' memoirs, as well as US Divisional Histories (1917–1918) tend to be more moderate in tone. The reason for the blanket condemnation of all Chauchat machine-rifles, including the CSRG M1915 and the CSRG M1918, is due in very large part to the disastrous service record of the CSRG M1918 (in .30-06) and to the ignorance of the useful service provided by the CSRG M1915 (in 8mm Lebel) during World War I."

Sounds like, aside from the silly open magazine design, the version using the cartridge the gun was actually designed for didn't do too badly. Go figure.

If wishes were fishes (considering my fisherman antics) and I were to have just one wish by the Machine Gun Fairy granted, it would be for a Belgian Rattlesnake - a Lewis gun.

The Chauchat featured (and not in the best light; The Night Clerk hated the thing) in the Great War chapters of Myrer's Once An Eagle. I seem to recall that there was some kind of special (and improvised) tool issued with the weapon to deal with stoppages.

Tam said it first (of course), but I think people are far too hard on the Chauchat. Certainly, the US and British experiences with the weapon are IRRELEVANT because 1) They didn't have a design of their own which was ready to be fielded before the end of the war (save the surprisingly unpopular, but reputedly very good Lewis Gun) and 2) because it wasn't designed for anything other than the 8mm Lebel.

Also, I find it odd that people, including the esteemed Ian Hogg, would decry the hand fitted, loose tolerance, and slip-shod manufacture of the Chauchat and point to it as a cause of it's problems, when the same standards has made the Kalashnikov a legend of reliability. You think those homemade AKs built in caves in Pakistan by kids with hammers and dull files are unreliable? My friends in Afghanistan don't seem to think so.

I would like to build a modern copy of the Chauchat and test it. The one modification I would make would be to close the magazine window (which was a terrible idea) which should markedly improve the performance of the gun. Remember that the French used the Chauchat for the entire war and found it to be reliable and eminently satisfactory. The French were notorious for putting designs through committee after committee after committee until the original design was changed so much that it bore little resemblance to the original (usually very innovative) gun an producing it too late for the next war.

Also, stop bad mouthing bicycle manufacturers. Bicycles are hard to make, and many arms makers also made bicycles in the pre-great war and post great war era. French Bicycles were some of the best in the world for much of the 19th and 20th century. The pattern of the modern "safety bicycle" was a french design. There weren't a bunch of car manufactures back then, and cars were notoriously unreliable compared to bicycles.