I had to pick a new radio station to wake up to and for some reason, it seemed to be a good idea at the time, I picked the NPR station. I guess I was hoping to wake up to classical music, instead I wake up to NPR news. (Music doesn't start until 9:00am) I had forgotten how bad it was. Some of it is just what news they decide to share with us, which is slanted at best. Then there is the political news, which is hard for me to stomach any time, and is so biased as to almost be propaganda instead of news. My favorite stories, however, have been a couple about the sliver of a waterway that has been gradually opening up in the Canadian Arctic. 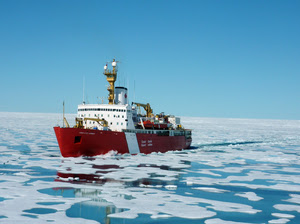 Arctic Warming Unlocking A Fabled Waterway by Jackie Northam
This was the first I heard, but the one that stuck with me. I heard more this morning. Apparently, the fabled Northwest Passage is coming into being and governments are already starting to worry about this, and who is going to control it, regulate it and how the region can be commercially exploited even though it is still "Bloody fucking cold" up there all the time, and super hard to get oil and gas out of frozen ground. Really? This is what you think is news? They choose to run stories about about a sliver of water no one can get a boat that's not an ice-breaker through at the present, for maybe a month or two a year before it freezes back up? Had these guys been around, they would have bemoaned the melting of the glaciers that dug out the great lakes, or uncovered New England.
Then again, it does fits into their narrative. It is an illustration, a "hard fact" if you will, of "Global Warming," sorry "climate change" my friends now say, sort of like all the pictures you see of Polar bears stranded on ice floes. They even had a guy on, an expert don't ya know, talking about, how on this year's trip to the Arctic the ice looked the same, but it felt different than last year. It had a different texture. It was softer ice, warmer ice. I had to wonder. Did it come in different flavors too? Snow Cone anyone? Was it grape, instead of blue raspberry? I may leave the station on just so I know what my liberal friends are listening to, or for the entertainment value, if I can stomach the political coverage. Their interview with Barney Frank nearly made me sick to my stomach. Besides, I really want to keep up with this Northwest Passage thing. The season could get longer this decade. Or the ice texture could change some more. Besides we really need to settle who is going to have the controlling presence in the region. Apparently, everyone except Canada thinks it should be international waters. Silly Canada. This is why I find it so amusing. No one contested the water before. Everyone was happy to let Canada have the water when it was frozen. 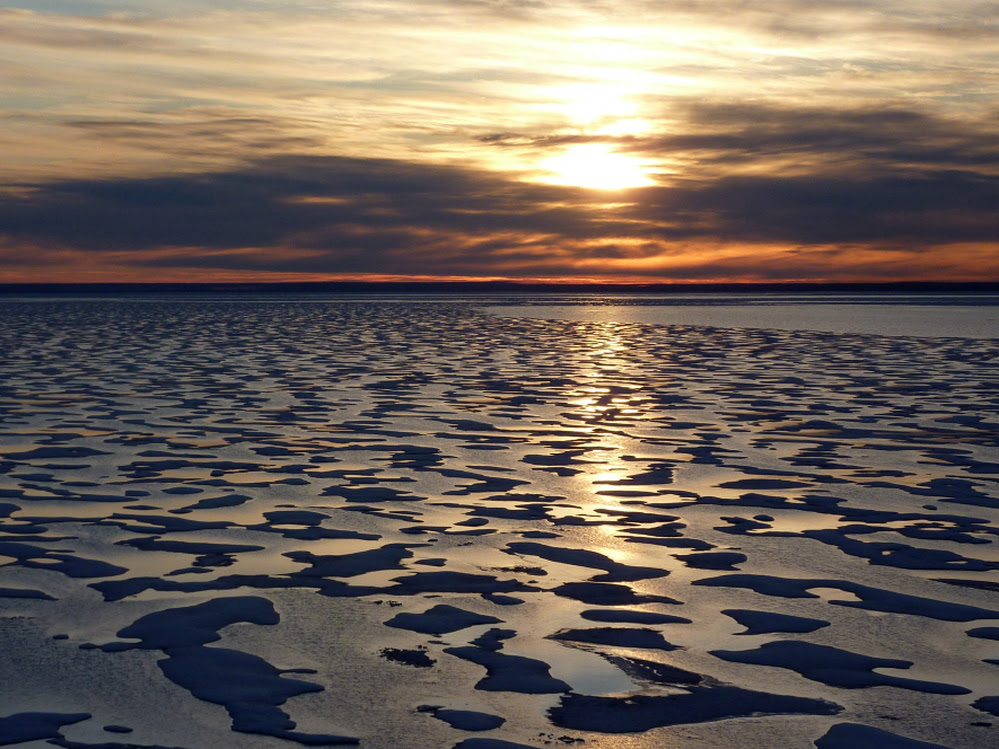 Now that it's melting, everyone wants it. It isn't the Panama Canal folks, not yet anyway. The U.S. of course is needed to be a stabilizing influence in the region. Yeah, we all know how hostile and combative those Canadians are. But, I guess since we all know the science is settled, every shipping company in the world is sure that someday it will be like the Panama Canal, open year round and big enough to haul many tankers through. I guess it is pretty, but not pretty enough for me to want to take an ice-breaker cruise.
You know, ice melts, it can freeze again too. Just ask those Alpine villagers whose villages are now being uncovered by retreating glaciers, or those Norse in Greenland who had to abandon their settlements when the ice encroached. Oh, did I forget to mention, they are fighting over Greenland again. It's warming up as well. Ah me, I think I'll go see if I can find some pictures of that snow in Auckland.

I listen to NPR while patroling sometimes, especially on the weekends. I have to be careful,though, to avoid the shows that make me want to ram into a telephone pole.

Cartalk, WWDTM, Radiolab, This American Life are all good shows (most of the time).

Yeah, I love "Wait, wait, Don't tell me." Apparently there are podcasts of these, But I haven't figured out podcasts yet. I am still figuring out blogging.

Any excuse to wave the AGW flag.
I haven't listened to a talk radio in over 30 years, and see no reason to change.

How warm is it? So warm that it's impossible to fact check a story.

Steel hulls and diesel engines are what opened the Northwest Passage.

Two things are not immediately obvious. The first is that all the pretty lines are within the margin of error for the sampling method used.

The second is that ice melting Chinese pollution is increasing almost exponentially.

So how much ice is melting? If any, not much. And we have a very good reason to think that actual temperatures must be falling, or else more ice would be melting.

I used to listen to NPR years ago. As I got older and more curmudgeonly I got to where I couldn't stand it and expunged it from my preprogrammed radio buttons.
Now whenever someone asks,"did you here that bit on NPR this morning?" I cringe.

Re: "I may leave the station on just so I know what my liberal friends are listening to, or for the entertainment value, if I can stomach the political coverage."

Hell of a way to start your day...

Arctic/Northwest Passage:
By international law, it appears Russia owns the North Pole (Comrade Santa via continental shelf). The US also uses some treaties from the DEW line days to claim US sovereignty on Canadian territory. US vs Canada war sometime in our grand-children's future? That hasn't happened since before Canada was a country. By then, bet on Canada.

And in general:
Just what's so bad about global warming anyway? Even assuming it's happening to the degree Al claims. (As someone originally from the Great Lakes region. Lake Superior isn't water - it's warm ice)
Q

It was actually open back in the 1920s and Greenland was 10 degrees warmer than it is now...

You'll be looking mighty hard for a mighty long time to see the "snow" in Auckland, New Zealand.

An unusual weather pattern of a stationary high in the Tasman Sea coupled with an equally slow moving to stationary low off the eastern part of the North Island allowed a stream of Antarctic air to funnel north and hit the east coast of the South Island and as it continued north it petered out and lost its moisture and warmed.

The "snow" was a dying wintry shower at the extreme limit of its reach which COULD (if you sort of screwed your eyes semi closed and kept your fingers crossed) have contained a flurry of snow (but DID have some hailstones mixed in too).

A sure sign of global something or another (not sure what)..

As an ex-pat British guy living and working in Auckland, I have seen worse in Consett, Co. Durham in June. No big deal but did make the main news on TV.

But my main concern is the aliens that are going to destroy the planet because we are spoiling it. NASA says so, don't you know? link here http://www.dailymail.co.uk/sciencetech/article-2027723/Aliens-vs-humans-Eco-friendly-extraterrestrials-wipe-planet-Earth-protect-civilisations.html

We're destroying the planet so the aliens will nuke it into gravel from orbit to stop us?? The sense of the ironic is just too much to resist ...

I wake up to NPR and have for years. Same reason: hear what the leftist talking points are. They pretty much get out all the talking points in a half hour.

The NW passage has been there off and on for ages, more influenced by wind than temperatures. Weather is not climate. Unless it backs warming, then it is. But not for denier scum.

Phil B, I was going to blog the "Space Aliens hate teh global warmeningz" thing, but for once, I'm struck speechless by the display of Teh Stupid.

This post needs some music to go with it:

(As someone originally from the Great Lakes region. Lake Superior isn't water - it's warm ice)
Q
My point exactly, I love global warming, I mean climate change. Where would Maine and Norway's coast be without it. I am amazed at how seriously everyone is taking this, but it's nice to know. And as for the comments on the passage being open periodically in the past, if NPR had wanted to do a really good story on this they could have mentioned that, instead of talking about how the ice "feels different." No, this isn't a passage that periodically opens up and closes again, made passable now by modern technology, but a "fabled" waterway. So slanted that they can't even tell they are on a hill.

What the hell do you call all the frozen water that I was underneath for the better part of a month?
I was on a nuclear submarine passing under ice too thick to surface through...yeah, there's definitely an ice cap.

Also, if you watch deadliest catch, occasionally the editors accidentally let through some of the evidence that pack ice is expanding farther, earlier, than any of these guys have seen in their 30-40 years in the same water.

There was a "terrifying" news article the other day about a Chilean glacier that had receeded back so far that it exposed plantlfe that hadn't seen the light of day for about 5,000 years.

The headline was some terrifying version of "Glaciers Melting due to Global Warming reveals plantlife that hasn't been exposed for over 5,000 years!"

My cynical mind read it differently. It went something along the lines of "5,000 Years Ago, it Was So Much Warmer That Plantlife Grew Abundantly Present Day Glacial Areas That Are Only Now Being Exposed Again!"