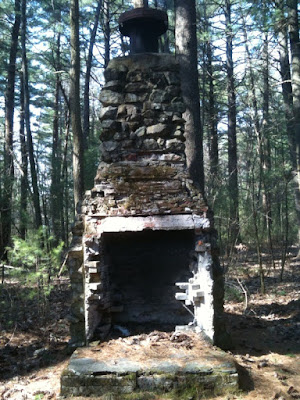 This masonry is wondrous; fates broke it
courtyard pavements were smashed; the work of giants is decaying.
Roofs are fallen, ruinous towers,
the frosty gate with frost on cement is ravaged,
chipped roofs are torn, fallen,
undermined by old age. The grasp of the earth possesses
the mighty builders, perished and fallen,
the hard grasp of earth, until a hundred generations
of people have departed.

The Ruin is an Eighth Century poem in Old English, the still Germanic root of our current language.  It describes the failing of the old Roman systems of engineering.  Nothing works anymore.

America is unique in many ways, but one particularly characteristic American trait is to pull up stakes and move.  New England forests are littered with stone walls, marking what used to be the boundaries of fields where people tried to grow crops in the stony soil.  It wasn't armies of barbarians that led to the ruins, but greener pastures elsewhere.

New England is also filled with run down and dilapidated mills.  The Industrial Revolution first landed on these shores in New England, but companies have slowly found themselves strangled by red tape and again, seek greener pastures elsewhere.  The town I used to live in, and where this picture was taken, was almost the location of Henry Ford's factory.  The Town Fathers seemingly didn't want all the dirty manufacturing jobs there, and so it remains a sleepy Boston bedroom community.

If you, like me, ever make the Highway 20 ride from Texas to Atlanta, you pass by an enormous and gleaming new Mercedes factory in Tuscaloosa.  Perhaps the Sudbury Town Fathers see Alabamians as barbarian hordes.

Thanks for including the OE; it has been a while since I did reading in it, and I've gotten rusty.

Whoa, whoa, whoa ole buddy!!!
Whats with the contemplative mood??? Just wore out and tired from your hard work? Shoot, don't go all maudlin on me. I read you everyday to get my brief moment of lucidity in this nutzo world.

Go sit out on the veranda, sip a sweet tea and soak up some sun. Rest today, because the hordes are at the door and we need reinforcements!

The farms in New England were abandoned during the year without a summer 1816 caused by the eruption of Mt Tambora in Indonesia during the previous year 1815.

Somebody looked up the HTML entity for thorn. I'm impressed.