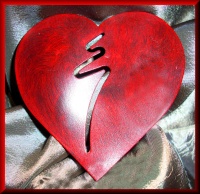 This is perhaps the most hauntingly lovely music ever written.  As Beethoven announced the beginning of the romantic era, this was its end - and the start of the modern era.

Wagner was a troublemaker, wanted by the Law for his early life (he was a revolutionary, back in the days before they were admired by governments).  He ran around on his wife, and on his mistresses.  He seduced the wives of his conductors.  They put up with it for this.

The story of Tristan and Isolde is very old, one of the Troubadour ballads from the High Middle Ages.  Tristan is a knight, sent to bring Isolde as a bride to King Mark.  Caught at sea in a storm, they drink a love potion, thinking it was a sea sickness cure, and fall madly in love with each other.  The love is doomed, and in Gottfried of Strassburg's twelfth century version, one of the travelers with them says, "Tristan, you have drunk your death."

Their doomed love is brought to life by Wagner in his opera, not least because of how he scored the work, and especially the finale here.  Liebestod means "Love's death", and it is the Romeo and Juliet simultaneous death scene.  Wagner revolutionized opera by his use of harmonic suspension, a repeated refusal to complete unfinished themes.  This refusal builds tension which is only released at the final, lyrical completion.  This particular scene is striking in how you hear the suspension from the very beginning of the video, and how it allows a very subdued final chord to be magnificent.  It takes a full six minutes to reach the "aha" moment where the theme resolves, which makes the resolution even more sweet.

This piece has a special meaning for me.  I visited Mom and Dad perhaps a year before his death.  They had season tickets to the Symphony, which performed this.  I'd never heard it before, and it led to a memorable chat with Dad about Gottfried von Strassburg, Schopenhauer, inflection points in music, and how they're all bound up in this music.  I sure miss those.

But it's more poignant, watching Mom as Isolde, today grieving over her dead Tristan.  Theirs was a towering love story, worthy of this music.  May I be so lucky as to be worthy of that.

Ah, Sunday morning music appreciation with Prof. Borepatch! I will have to travel to the Amazon and add to my meager Wagner holdings. Always a treat.

I remember in Latin class, discussing this piece with the teacher (pretty sure this would never happen today!). When it was revealed that Liebstod is synonymous with orgasm, a class of bored 16-year old boys was instantly riveted at the news and had to hear the piece (and developed a concurrent interest in German, I'd wager). There can't be any better way to inspire a bunch of savages to appreciate classical music.