Via Aretae, we find this:


I guess liberals are gleeful over the generally nutty display at last night's GOP shindig, but I will say this for the Republicans--as a matter of pure aesthetics, they have produced once again a genuine bestiary of real American types, whereas every time I see a gathering of Democrats, they seem to have beamed straight from some nearby planet, speak through slightly glitchy universal translators, learned human mannerisms from watching distant television broadcasts that have at long last diffused through space.  You may think that Mitt Romney is a huge fake, and you're right; but even he is recognizably homo americanus: the hair, the smile, the "my friend," the gladhanding--he's a classic bonhommian businesstype; Bachman is no nuttier than any other PTA or Little League lady I've had the displeasure to know; Ron Paul is as affable and futilely beloved as any barroom political crank; even the crackpot pizzabaron is comfortably of the same species as you and me.  Barack Obama on the other hand seems like a holodeck beta test.

That's so full of win that it hurts.  If I weren't so lazy, I'd photoshop Obama as Data.  Besides, HuffPo beat me to it. 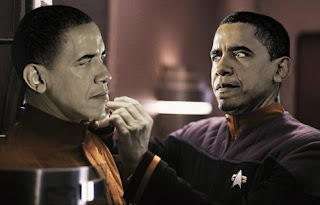 Data's character, as I mentioned yesterday, was new to the world. It learned of him as he learned of it. Seems like a perfect fit to me. Besides, who doesn't think Barack Obama has an evil twin brother? You know he does.

Guess we know who's been golfing, and who's been running the country for the last while.  Heh.

And IOZ isn't by any stretch of the imagination a card carrying member of the Vast Right Wing Conspiracy.  Or HuffPo.  Double Heh.
Posted by Borepatch

Labels: heh, i am a nerd, intellectual left, politics, Quote of the Day

I always get a chuckle out of the candidates trying to "out-American" each other...

And speaking of experience, I thought you might get a chuckle out of a recent resume that came across my desk... This person claimed over 20 years of experience in web-development and e-marketing...

...which is truly amazing when you stop and remember that Al Gore didn't invent the World-Wide-Web until 1993... only 18 years ago!

Dann, clearly the guy was an innovator!

Obama *does* have an evil twin brother. He just happens to be a Tea Party radical. His family doesn't speak his name...