I can't believe that it's3 months into the new year, and this is the first of these.  I'm slacking off.

The EU has just adopted a resolution mandating elimination of cars from cities and a 50% reduction in low-cost flights to southern Europe:

The European Commission on Monday unveiled a "single European transport area" aimed at enforcing "a profound shift in transport patterns for passengers" by 2050.

The plan also envisages an end to cheap holiday flights from Britain to southern Europe with a target that over 50 per cent of all journeys above 186 miles should be by rail.
Top of the EU's list to cut climate change emissions is a target of "zero" for the number of petrol and diesel-driven cars and lorries in the EU's future cities.
Siim Kallas, the EU transport commission, insisted that Brussels directives and new taxation of fuel would be used to force people out of their cars and onto "alternative" means of transport.

Translation: we've tried to convince all y'all; now we're going to make you.

Good luck with that.  What's the over/under on EU breakup happening before 2050?

This is getting reported kind of all over.  What's not getting reported is why.  The Sierra-Nevada mountains didn't just get record snowfall this winter, they got twice the normal snowfall:

The Snow Water Equivalent is well above normal and bodes well for both agriculture and coastal cities which rely on the melting snow for irrigation and drinking water. There have been battles for decades over how much water the farmers should get to use in the long dry growing season.

The downside?  There will be so much fresh water that there will be enough for even hippies to shower ...

This is me, looking shocked.  Shocked:


With Earth Day about a month away, Americans tell Gallup they worry the most about several water-related risks and issues among nine major environmental issues. They worry least about global warming and loss of open spaces.

Maybe the hysterical shrieking of the last decade - combined with the collapse of all past predictions of higher temperatures in the face of a decade of cooler weather - has something to do with it?  Nah - got to be those Big Oil funded Deniers!  Go take a shower, hippy.

This is me, looking shocked.  Again:


EXTREME rainfall so rare it happens on average once every 2000 years has been "invented" by the government operator of a major Queensland dam as part of its explanation for releasing huge volumes of water that caused most of Brisbane's January flood.

The claim by SEQWater in its official report that a "one-in-2000-year" rainfall event occurred over the Wivenhoe Dam at a critical stage on January 11 has been widely reported in the media and cited by senior public servants to justify the near loss of control of the dam at the time.
But no such rainfall event was measured by any rainfall gauges.

Instead, the claim was manufactured by SEQWater after it modelled the rapid rise of levels in the dam, repositioned rainfall data to an area immediately upstream of the dam, and then doubled it.

Look, guys, don't be too hard on them.  All the data supporting Global Warming is dodgy.  All of it.  These guys are just following climate science "Best Practice".  First the sentence, then the trial ...

Boy, it's a good thing that the US public isn't paying much attention to that, or you'd have even less of them worried about Global Warming ...

How the sausage is made

Inspired by Adams, and offered for your approval: 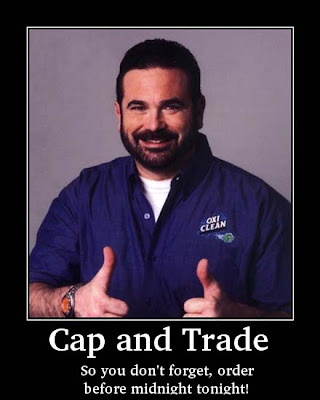 Most stolen from Watts Up With That, 'cause I'm kind of busy.
Posted by Borepatch

Something that jumped out at me - that Gallup poll shows that almost 80% of people polled are concerned about "Contamination of soil and water by toxic waste." So if the enviros can finally convince these people that lead is a "toxic waste" polluting their soil and water then we can go through that whole "ban on lead bullets" debacle once again. Every silver lining has a cloud...

I was wondering if you were going to use that Dilbert. :-D

On the other hand, The downside? There will be so much fresh water that there will be enough for even hippies to shower ... Don't worry. They won't.

I'm a member of the American Geophysical Union and thought I'd share the opening sentences of the lead story in the organization's weekly newsletter (EOS, Mar22, 2011).

I'm apparently in the minority - feeling that "global warming" (aka "climate change") tends to have a little too much Sky-Is-Falling feel to it.

Oh, no! The dirt almost contacts the atmosphere! There might be interaction! We need a new issue for "major concern".

How long until "we" decide that we certainly can't let those Scots continue BURNING the stuff to make whiskey...(although that may be classified as a green fuel...)

(I'm not a member of the comment organizations listed and don't have a URL: that leaves "Anony-mouse" as an option to comment. Need to get more involved...)
*****************
AGU EOS: March 22, 2011
Z. Yu, et al
"Global peatlands store a very large carbon(C) pool located within a few meters of the atmosphere. Thus, peatland-atmosphere C exchange should be a major concern to global change scientists: Will large amounts of respired belowground C be released in a warmer climate, causing the climate to further warm (a positive climate
feedback)? Will more C be sequestered due to increased plant growth in a warmer climate?
...
These questions remain challenging, but some significant progress has been made recently."

While there may be enough water for Calif farmers at this time, it is a shame that the farmers can't start & stop farming as easily as opening and closing a tap. A whole lot of them went broke/quit farming during the "dry" years when the State turned off the water.