On the Internet, nobody knows that you're a dog ...

... but everyone knows that you're a jerk, because you told them:


[Gilbert Gottfried] made headlines this week when a series of offensive jokes he posted on Twitter about the earthquake and tsunami in Japan cost him a job as the voice of the Aflac duck.


Hard to blame Aflac – Gottfried's jokes were tasteless and ill-timed, and Aflac does about three-quarters of its business in Japan. Gottfried later took the jokes down and apologized. (You can read some of them here, but fair warning.)

Here's an example of Gottfried's "humor":

Not only do we know that Gottfried is a jerk, but because he tweeted this, we know he's a twit.  Dude, teh Intarw3bz go everywhere.  That's the point of teh Intarw3bz ...

For the three readers who have never run across the post title, here's the original New Yorker cartoon by Peter Steiner.  It was published in the summer of 1993 (!). 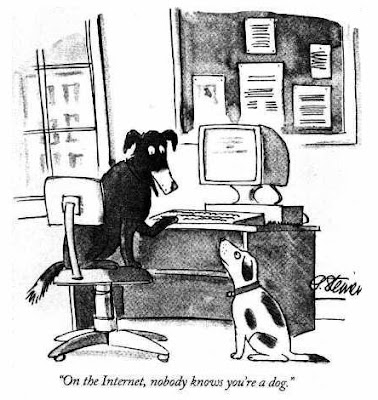 Note to Gilbert Gottfried: teh Intarw3bz went everywhere in 1993, too.
Posted by Borepatch

I think the only reason he was able to keep his job as long as he did was because not a lot of people knew he was doing the voice over for the duck. As offensive as he might be, his biggest offense is that he's just not funny.

I don't think he'll be all that hard to replace. After all, his replacement only has to say "AFLAC" in a nasal voice. Well, that and not offend a lot of people.

Regardless, why is it that everyone wants to fire people all the time? It is getting so that no one can do anything without someone demanding that their lives be ruined because someone was offended.

People need to pull up the big boy pants and realize that it was a JOKE.

To be honest, I have a hard time getting worked up about this. I mean, the banksters stole from people during the subprime meltdown and they didn't get fired, they got big bonuses.

I can imagine what it looks like to the Japanese to be the subject of a throwaway line while the President is picking basketball teams. If Gottfried forgot that other countries use the internet, well so did the entire Administration of the current President.

The fine line between laughing with them and laughing at them.