Meet Dad, in his own words. Part II

Dad the reluctant warrior (from his memoirs):


... I was approaching my major victory in Basic Training. "As neurotic as that is," my February 9 letter [to my Mom] admitted, "I'm really getting odd over my rifle.  I can't stand the damn thing, so I'm developing a real compulsion to conquer it.  I have so much trouble getting it together and apart and now a new compulsion is taking shape.  Everyone gets about twenty hours of instruction in rifle before the rifle is even fired.  In target scores, there is Expert, Sharpshooter, Marksman, and Bolo.  A Bolo has not met the minimum qualifications in marksmanship to deserve a rifle and, in the old days, a Bolo was the man who hacked through the jungle leading the way for riflemen.  I have an obsession, bordering on unbalance, to make Expert.  I lap up instruction like a sponge.  It is the only thing so far that I've gone RA over (RA [Regular Army - Borepatch] is army talk for gung ho).  All qualifying riflemen get badges and I want that Expert badge so bad I can taste it and fear being Bolo with equal passion" ...

"Yesterday," said my February 24 letter, "the company fired for record on the rifle range.  I may have shot an Expert rating.  My unofficial score is 216 or four points over the 212 needed to qualify for Expert ... I never would have done it had it not been for an ex-juvenile delinquent (no exageration) from Los Angeles who said to me before we started, 'I can do anything better than you can, [Dad Borepatch], including shooting.'  From him, that was too much, so on the first shot group, I shot eight bulls eyes out of eight shots.  The rest was often shaky and not until the last did I feel any pressure.  My, but I'm glad it's over." 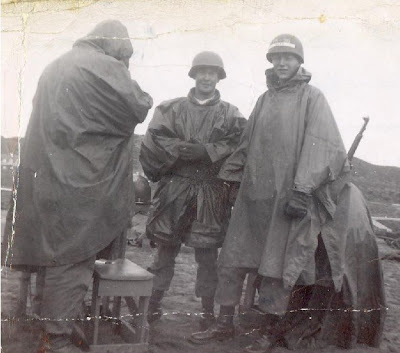 The Korean War was over by then, and since he was a College Boy, he got put into a battalion of Rocket Scientists:


After Basic Training, the U.S. Army decided that anyone so technically proficient or so over-educated as I could be a guided missile soldier.  So, I was sent to Fort Bliss, Texas for training to join the first of several Corporal missile battalions.  The Corporal missile was a ground to ground missile with preset guidance for a range of 80-100 miles.  Its rocket engine fired when its propellants of aniline and red-fuming nitric acid simply mixed.  The Corporal missile had been developed from the World War II German V-2 missile, which it resembled ...

The 557th [Dad's Battalion - Borepatch] was the first Battalion to make the Corporal Missile hit its target.  We did that on the White Sands Missile Range, north of El Paso in New Mexico ... The battalion, with all of its vehicles, drove north of El Paso to our launching site in a landscape of sand dunes and mesquite.  We pitched 8-man squad tents, heated with diesel-burning stoves.  A PX truck arrived and I bought enough beer for several days, just in case.  The next morning, we awoke to find an inch or two of snow on the ground.  Snow of any kind was so unusual in southern New Mexico and the fire control people at White Sands Missile Range that were going to let us fire did not show up to work.  We had to remove the fuel from the ready-to-fire Corporal missile and start over.  We spent a second night of winter camping in the desert, refueled the missile and sent it on its way right to the target.  It hit the target, because our commander, an Annapolis graduate, chose to use "Kentucky Windage" instead of relying on the vacuum tube guidance system.

We kids heard this story regularly when we were growing up - it was the one he would roll out when we asked him to tell us about his army days.  He was typical of many of his generation: going when he was called up, putting his time in, and making the best of things that he could.

(Image source, with background on the Corporal Missile)
Posted by Borepatch

When you type something and upload it to the web, it's forever. For as long as there is a network and server archives, these words will persist. If I was looking forward to starships being sent into the void to colonize the galaxy, one of the things I imagine is that they would take the full archive of human digital information. It will probably fit on an N-space wafer the size of an i-Pod, but somewhere in there, will be your written memories of your dad.

That rocket stuff is really cool...

Thanks for sharing that. :)

you're fortunate to have such stories from your dad. treasure them.