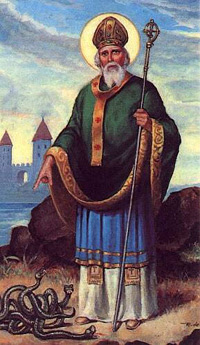 The longest journey a man will ever take is the eighteen inches between his head and his heart.

The Emperor recalled the Legions from Britain in 410 A.D., leaving behind a thoroughly romanized province.  Towns continued their business the Roman way, collecting taxes, debating local policies in the forum, sending their children to study under professional rhetoricians, just as in Rome itself.

St. Patrick wrote in his Confessions of how he was perhaps the least likely to become the Voice of the Irish, Vox Hiberionacum:


1 I, Patrick, a sinner, a most simple countryman, the least of all the faithful and most contemptible to many, had for father the deacon Calpurnius, son of the late Potitus, a priest, of the settlement [vicus] of Bannavem Taburniae; he had a small villa nearby where I was taken captive. I was at that time about sixteen years of age. I did not, indeed, know the true God; and I was taken into captivity in Ireland with many thousands of people, according to our desserts, for quite drawn away from God, we did not keep his precepts, nor were we obedient to our priests who used to remind us of our salvation. And the Lord brought down on us the fury of his being and scattered us among many nations, even to the ends of the earth, where I, in my smallness, am now to be found among foreigners.

2 And there the Lord opened my mind to an awareness of my unbelief, in order that, even so late, I might remember my transgressions and turn with all my heart to the Lord my God, who had regard for my insignificance and pitied my youth and ignorance. And he watched over me before I knew him, and before I learned sense or even distinguished between good and evil, and he protected me, and consoled me as a father would his son.

It may be that he returned to Ireland because his former schoolmates were so far ahead of him that he could not realistically find work as a rhetorician.  Patrick's latin is famously bad, but this memoir survived from around 450 A.D. not because of its quality as literature, but because of how he described that eighteen inch journey that he himself took:


12 I am, then, first of all, countryfied, an exile, evidently unlearned, one who is not able to see into the future, but I know for certain, that before I was humbled I was like a stone lying in deep mire, and he that is mighty came and in his mercy raised me up and,indeed, lifted me high up and placed me on top of the wall. And from there I ought to shout out in gratitude to the Lord for his great favours in this world and for ever, that the mind of man cannot measure.

And a good thing for Ireland, and indeed all of Europe and western civilization.  Thomas Cahill writes in How The Irish Saved Civilization of how the Irish monasteries kept the flame of learning burning through the Dark Ages.  More remote (and more importantly, less wealthy) than the old Roman provinces, Ireland suffered less from Viking raids.  Where Viking plunder raids ultimately completely destroyed the great monasteries like Lindisfarne, the Irish monks kept their steady pace of copying the old works.

Including, of course, Patrick's Confessions, with its story of transformation by Grace.

(Image source, which has some pretty interesting background)
Posted by Borepatch

Although the monks of Lindisfarne whose monastery had been founded by Irish monks by the way had their monastery destroyed a lot of the monks survived.
They wandered around for a while and eventually founded a new monastery at Durham at an ideal defensive site.
Here at the magnificent Romanesque cathedral you can see the grave of the venerable Bede. The first English historian.

While Paddy is reveared, there is the small matter of St Decclan, pre Patrician bishop of Munster, based at Ardmore, on the south coast.

There is a particularly good 10th century round tower on the site of his church, though it is no where near as impressive as Durham Cathedral :-)

Crown Armorer, we went by train from London to Edinburgh some years ago, and the view of Lindisfarne island in the afternoon sunlight, lit by a break in the clouds is unbelievably striking.

I never got back there, which is unfortunate. I also never got to Durham, which I'm told is a real gem.

I very much enjoyed this Ted - thanks!
cheers, erich