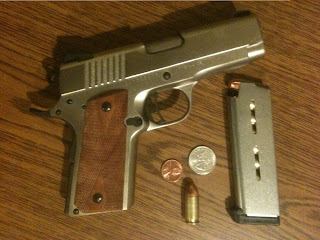 The problem with the 1911, of course, is that they're pretty large for concealed carry.  While the Springfield Armory model never failed to make me drool, something in the back of my head kept whispering that it was big - maybe too big to comfortably carry.  And so I found that I kept looking, and looking.

And then one day I stopped in at the local gun store, and they had this.  It's made by Rock Island, so it's on the low end, but it had quite a lot going for it:

Sure, it's not a Colt, but you have to start somewhere, and the size and solidity seemed to make it worth taking a chance.  And so I did. 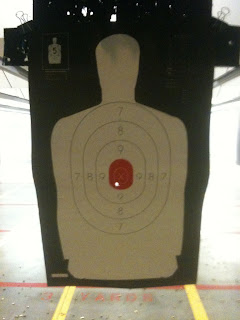 As to accuracy - it's a 1911.  First shot at 8 yards.  Needless to say, it shoots better than I do, although long time readers will know that doesn't say much.

Range Report when I get a chance to give it a real range day, and a good detail strip/cleaning.
Posted by Borepatch

I hang out on the Florida Concealed Carry forums (under my real name), and FWIW, the Rock Islands are usually recommended as a "starter" 1911. They are said to be better than others in their price class.

Like you, I've been lusting after a Springfield 1911 for quite a while (in stainless with cocobolo grips - drool). I also realized it was too big to carry, and my range time seems to be leaning to rifles. Now that it's getting to be summer, and too hot for days out at the range, I will probably do more indoor range time, and that 1911 may be in the future.

Yay, new guns! Perfect for the 100 year anniversary, and perfect for BAG Day!

Good to live in a Free State, no?

One of my three carry handguns is a Kimber Compact Stainless II.
4" barrel & officers model frame.
Tritium nite sights & a CT laser.
Stainless Steel construction. The pistol is accurate and has been totally reliable, even from new. It actually conceals more easily than my Smith M 640 Stainless J frame. (no cylinder bulge)
I feel that This type pistol, like what you bought, is probably the best compromise between power, concealability and shootability.
It's only downside is the weight, which after an 18 hour day can be noticable.

Congratulations on the purchase of a firearm!

Have looked at them in the past and always eyeball them when I happen to find myself in a gun shop.

A blued version of that pistol was my first 1911. It (and the 5" 1911 that replaced it) could spend an entire day comfortably carried in a CrossBreed SuperTuck.

What leather for that? In my search for carry I've been coming across more and more of a favoritism (or at least a hatred of floppy-ness) for for the Crossbreed and Comp-Tac hybrids of kydex and leather, from my friend Sebastian to the well respected Pdb anyhow...

You lucky so-an-so thats got me all jealous.

Beautiful BP. Now for a holster.

I might have something for that, I think I bought a size too-small.