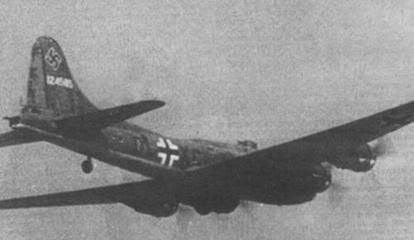 From the you don't see that every day files, the Germans captured at least one B-17 Flying Fortress.  Operated by the KG 200 special Luftwaffe unit, it was perhaps intended to be used for long range reconnaissance.  Instead, it was flown by its Luftwaffe crew to Spain in 1944 where it (and they) were interned by the Spanish government.

The Germans also captured a B-24 Liberator bomber, which was for some reason flown to join an Allied B-24 raid in February 1945:


On a February 1945 741st BS mission against Vienna, "Before reaching the target, a 'phantom' B-24 joined our formation.…The P-51s [of the Tuskegee Airmen] came in and over the radio…the German phantom pilot said he was from the 55th Wing and got lost. But the 55th Wing wasn't flying that day and the plane had no tail markings. The fighter pilot squadron leader gave him some bursts from his guns and warned the phantom to turn back. He added, 'You will be escorted.' The German pilot replied that he could make it alone. The P-51 pilot said: 'You are going to be escorted whether you want it or not. You're going to have two men on your tail all the way back and don't try to land in Yugoslavia.'…The phantom left with his escort and we heard nothing further from the event."

I must say that this is one of the strangest stories I've ever heard.
Posted by Borepatch

Quite the story. I wonder what the intent of the rogue B-24 was. Seems unlikely it would try to shoot the rest of the group.

In fairness, there were an awful lot of MiGs with F-xxx numbers.

I do wonder what the intent of that B-24 was. Were they defecting? Planning on getting into the middle of the formation where they were relatively insulated from fighter escorts and start using the turret and waist guns to down allied bombers?

This would have been a pretty devastating tactic if that is what they decided to do. Consider the allied bombers would have to shoot INTO their own formation to get rid of the threat, very possibly catching themselves in the crossfire. I mean, it would have been a suicide mission for the germans but man they could have really caused some trouble...