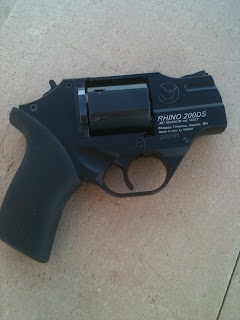 Reader Erich was kind enough to take me to the Albuquerque Range the last time I was out there (and a very nice range it is).  He was also kind enough to let me shoot his Chiappa Rhino, which is a very interesting revolver.

The design works, and works brilliantly.  This is a .357 Magnum revolver weighing 25 ounces (!) that is simply a pleasure to shoot.  And therein lies the tale of the design.

The most important part of the design is the barrel placement, which is aligned with the bottom cylinder, not the top one.  Chiappa describes why:


The new Chiappa Rhino barrel is aligned with the bottom most chamber which is the key component to Rhino's tame characteristics. The position of the barrel lowers the center of gravity and yields a centerline of the bore more in line with the shooter's arm allowing for the most natural "point ability" while engaging a target. This characteristic also drastically reduces both recoil and muzzle flip which insures subsequent shots to be on target faster than ever before. The reduction of the recoil allows for the use of ultra light alloys to be used in the construction of the Rhino minimizing any adverse effect.[bold in the original - Borepatch]

While the revolver is quite frankly butt-ugly, Chiappa's description is entirely correct.  There is no muzzle flip, even when shooting 195 grain .357 Magnum loads.  Remember - the revolver only weighs a pound and a half. 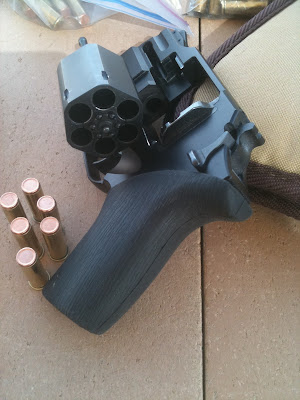 You can see the barrel placement here.  It puts the recoil force vector in line with your hand and arm, so the recoil is if anything like what you'd get from a 1911 - a soft push, rather than the snappy rotation that I'm used to with .357 revolvers.

Like I said, this is not your Dad's .357 snubby.  Erich brought along a Colt Detective Special (IIRC, this is the same as JayG's "Snubby From Hell").  Almost the same size and weight, but ferociously unpleasant to shoot. 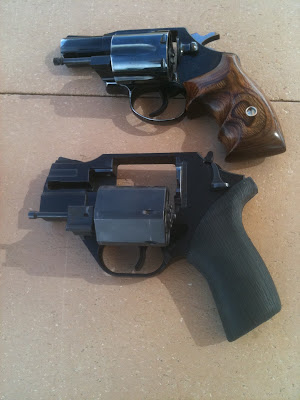 There's a lot to like about revolvers for a concealed carry gun, not least of which is that your "malfunction drill" is "pull the trigger again".  Despite every fiber of my being screaming at the top of it's lungs ugly plastic space gun, this would be a very, very good choice.  If you're considering a CCW revolver, you really need to look into one of these.

One potential downside is that they seem kind of spendy - north of $800 not so long ago, although street prices may be less.

Once again, a huge thanks to Erich for a fabulous morning at the range, and the chance to shoot one of the most interesting guns I've ever fired.  Erich put up a detailed post about his experiences with his Rhino, that's well worth your time, although it appears that registration is now required.

That's awesome! Reminds me of why I like shooting Glocks. Putting the barrel low in the body makes a real difference.

I'd love to get my hands on one of these to try out sometime.

Grant Cunningham did a pretty detailed review of the Rhino's interior. Worth reading if you're interested in one.

Personally, I think they're great looking. Our differences are what keeps the world spinning. ;)


Many thanks aczarnowski, for the Grant Cunningham link.

Where it says it is one of Ghisoni's designs! allong with his update of the Fosberry semi auto revolver.

Hey, neat! I know that gun!

Nice report, Ted; hope we can shoot again one of these days.

JayG's "snubby from hell" is a S&W light weight (Scandium?) .357, not a Colt Detective Special. I think he has one of those too, but IIRC, they are chambered in .39 special.

That being said, I'm intrigued by the Chiappa revolvers. Sadly, I doubt we'll see them here in the PRC so I'll have to wait until I'm somewhere else AND have the chance to try one.