You spare the rod, you'll spoil that child 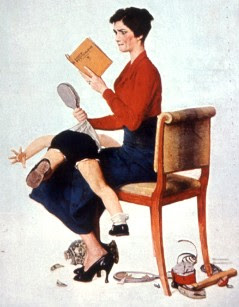 Well, otherwise, it's hard to understand how a "Back to the Future" moment can be seen as astonishing:

“No one likes to spank their child,” admits Trumbull, “And I wouldn’t advocate that anyone spank their child if they don’t want to. But the point is, it can be an effective tool for use with young children between the ages of 2 and 6 years when milder measures fail.”

In other news of the unexpected, school children perform much better when schools insist on discipline, study, and hard work:

School administrators take pride in their record of frequently firing teachers they consider to be underperforming. Unions are embraced with the same warmth accorded "self-esteem experts, panhandlers, drug dealers and those snapping turtles who refuse to put forth their best effort," to quote the school's website.

Students, almost all poor, wear uniforms and are subject to disciplinary procedures redolent of military school. One local school district official was horrified to learn that a girl was forced to clean the boys' restroom as punishment.

It would be easy to dismiss American Indian as one of the nuttier offshoots of the fast-growing charter school movement, which allows schools to receive public funding but operate outside of day-to-day district oversight. But the schools command attention for one very simple reason: By standard measures, they are among the very best in California.

If the politicians stop poking their noses into people's affairs and let parents discipline their children then we wouldn't have youth running amok like we see everyday.

Of course, there is a major difference between showing some discipline to children and blatant abuse.

However, the politician's making up silly laws that don't suit real life people were once disciplined by their own parents once upon a time.

I personally have observed first hand how some parents who have disciplined some of their children and not others have realised their folly. The ones who were spoiled were guaranteed to be the ones who gave them the most headache as adults. These are usually the ones who are the most selfish, self-centred, greedy, lazy and at times dihonest.

I think the researchers should do a study on this. Parents who disciplined their kids and those who did not and how the kids faired in later life. I am sure that would make an interesting study.