Boston Subway: no greener than an SUV

The old saying goes that it's not what you don't know that's the problem; it's what you know that simply isn't true. "Everyone knows" that mass transit is greener (more energy efficient) than cars - especially SUVs.

What I learned about public transit in the USA shocked me. I've been a fan of public transit, taking it where it's practical for me, and feeling green about it. That transit is a significantly greener way to get around than private car travel almost goes without saying in our thoughts and discussions. 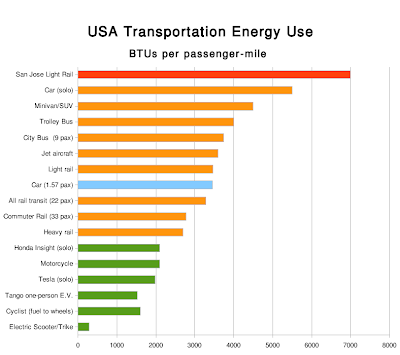 Brad Templeton has a long and information-dense post about energy efficiency in transportation, compiled from the US Government Bureau of Transportation and the Energy Department. Take a look at that graph, and go way, way up (almost to the top) to the "Minivan/SUV" line: about 4400 BTU per passenger mile. Now check out the efficiency of various city's subway ("Heavy Rail") systems:

Go way, way up (almost to the top) to the "Boston, MA" line: around 4400 BTU per passenger mile. SUV-land for all you T riders.

This is very counter-intuitive, even to a skeptic like me. Templeton takes us in-depth to a set of poorly-visible causes that skew our "Public transit is greener" assumptions:

But transit systems never consist of nothing but full vehicles. They run most of their day with light loads.

Transit vehicles also tend to stop and start a lot, which eats a lot of energy, even with regenerative braking. And most transit vehicles are just plain heavy, and not very aerodynamic. Indeed, you'll see tables in the DoE reports that show that over the past 30 years, private cars have gotten 30% more efficient, while buses have gotten 60% less efficient and trains about 25% worse.

In order to get people to ride transit, you must offer frequent service, all day long. They want to know they have the freedom to leave at different times. But that means emptier vehicles outside of rush hour.

Transit planning is also driven by different economies. Often transit infrastructure (including vehicles) is paid for by state or federal money, while drivers (but also fuel) are paid from local city budgets. This seems to push local city transit agencies to get bigger vehicles and fewer drivers where they can, since drivers tend to be hired full-time and can't be kept idling in low-demand periods.

He also discusses how other countries compare, how different forms of transportation (motorcycles, hybrids, regular cars, etc) compare, and background on electric generating efficiencies and how they might or might not change the overall numbers (short answer: not much).

Highly, highly recommended, although it's a long article. Remember, it's from the point of view of someone who is a fan of mass transit. Science and public policy discussions done right, on display for your consideration. You may or may not agree with him, but he puts his data, methods, and sources out there for y'all to play with.

He does base a lot of his energy calculations on electricity generation from coal.

I wonder how those calculations change as we eventually move from coal to nuclear, and from petroleum to electric cars(which are "off the charts" efficiency-wise - his words)

It's also gratifying to see that motorcycles are rated so well. Maybe we can get more people to commute on a Harley-Davidson!

Ha! That's out Toonerville Trolly right on top! The San Jose-Mountain View (Lockheed-Martin-Juniper Networtks) Light Rail, ridership is best and most generously described as "thin" - and there's a luxury housing/condo complex that was built out by those company campuses that is totally empty. Vacant like the local commercial real-estate, what with the current home values.