Seems that some terrorists couldn't, like, buy some guns to shoot up a mall:

27-year-old man from Sudbury [Massachusetts] has been arrested on charges he planned terrorism attacks inside and outside the United States, including a plot to use automatic weapons to open fire at shoppers and emergency responders in shopping mall attacks, federal prosecutors said today.

The plot included plans to fire at emergency responders, but was abandoned because the men could not obtain the weapons, authorities said.

This cannot possibly be correctly reported. After all, there is a huge billboard near Fenway Park that says terrorists can get guns at Gun Shows. Clearly this is another example of the Media failing to properly fact check a story. 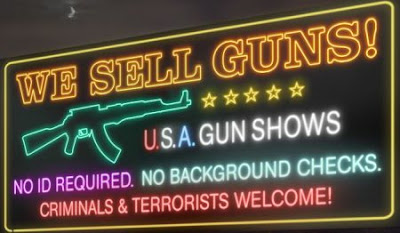 Hey, don't be like Fox, guys.
Posted by Borepatch

Just like reporting that the Mexican drug dealers are buying all those full autos at Texas Gun shows. Wish I could find those gun shows that sell those to just anybody. ;)

Oooh I'd forgotten about that fucking Billboard!

Also I'm greatful the dude watches too many movies. Frankly if I was in charge of the Army I'd dump the M16/m4 platform for the AR10 or similar in semi-auto only, as I see it as a FAR more effective infantry rifle.

Where is that show? When? Do they have a website? How is the pricing? Don't tease me!!! Can I get a machine gun? Grenades? You know, like the Mexicans were showing, the ones the MSM were saying came from the United States...

I bet they are giving the guns away and you just want them all for yourself.