Tammy Wynette - Stand By Your Man 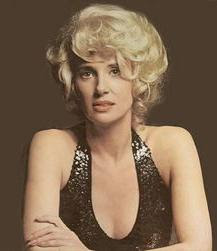 "The sad part about happy endings is there's nothing to write about."

Tammy Wynette didn't usually worry too much about happy endings. Married five times, critically ill several times, she saw her house burn down shortly before she was hunted by a stalker. Oh, and her father died when she was a baby.

It's no wonder that she kept renewing her cosmetology license each year. As she would tell people, she wanted a fall back plan just in case she had to get a Day Job.

Country music fans remember her as "the First Lady of Country", with husband #3 George Jones. Political junkies remember the brouhaha in 1992, when Hillary Clinton said, on 60 Minutes, "I'm not sitting here as some little woman standing by my man like Tammy Wynette." Fans of the TV show King Of The Hill know remember her as the voice of Hank Hill's mom, Tillie Mae Hill. And a whole generation of Euro-Pop remembers her from her collaboration with the KLF on Justified and Ancient.* That's one eclectic mix.

Sometimes it's hard to be a woman
Giving all your love to just one man
You'll have bad times
And he'll have good times
Doin things that you don't understand
But if you love him
You'll forgive him
Even though he's hard to understand
And if you love him
Oh, be proud of him
Cause after all he's just a man

* Just for grins, the KLF with the First Lady of Country Music:

I can't hear this song without picturing the scene from Bob's Country Bunker in "The Blues Brothers"...

Specifically the one lone guy amidst all the couples, furiously drinking his beer while trying desperately to keep from crying.

I think we've all been that guy, at least once.

Jay, that's a great scene, although Honorable Mention should go to the scene with Carrie Fischer backing heat.