Impertinent, with a hint of berries and tobacco ...

... but leaves you with a bad case of the munchies:

Denver's Westword newspaper has unsurprisingly received more than 120 applications for the post of marijuana reviewer, many of whom are offering to do the job for nothing.

The site is seeking a permanent critic for its "Mile Highs and Lows" column, AP reports, who'll become "the first professional newspaper critic of medical marijuana in the country".

Better hurry if you want to get your name in. But the competition is fierce, from (ahem) professionals:

The paper is now sorting the weed from the chaff by asking wannabe pro dopeheads to outline "What Marijuana Means to Me". One hopeful, a former heroin addict, explains: "it has never let me down. never made me want to rob a bank. never put me in a situation where i felt compelled to prostitute myself".

And this explains why M.J. hasn't been legalized yet: 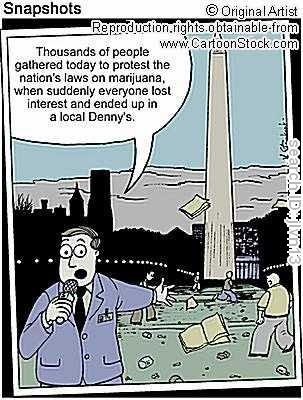 They keep talking about Obama being friendly to local permissive laws to Pot use. (Of course I'm adamantly against medical use of marijuana as it's the same as a doctor prescribing "Bourbon" or "Ginger" for an illness. We have pharmaceuticals that are made from compounds found in marijuana that can be administered in controlled and safe doses, not smoking a living plant grown under nonstandard conditions from various genetic strains)

But I fail to see why we should get law enforcement involved in a minor recreational drug such as this.

I self-prescribe bourbon as needed.

I don't care about pot. Don't care. Cannot be convinced to care. Legalize it immediately. Release anyone currently in jail for pot related offenses (not robbery or violence related to, but possession or use). If a doctor determines that use would be beneficial, fine. If it is used recreationally, fine.