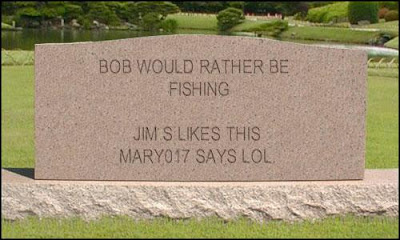 Facebook has announced a new service for the friends and family of dead people.

Monday morning, after some public pressure from Canada's privacy czar, Mark Zuckerberg and company told the world they're now "memorializing" the Facebook profiles of those who graduate to that big social network in the sky.

"When someone leaves us, they don't leave our memories or our social network," Facebook man Max Kelly wrote on the official Facebook blog. "To reflect that reality, we created the idea of 'memorialized' profiles as a place where people can save and share their memories of those who've passed."

This isn't such a bad idea, actually. I have to say, though, that "thoughtful" struggled with "snark" for a while.

But only a while.
Posted by Borepatch