The science is settled.

OK, so what's with the Ripogenus Dam?

You don't get much more rural than that. Way, way up the west branch of the Penobscot river in Maine, it's the sort of place that Boy Scouts go for week long canoe voyages through the wilderness. 1972, Troop 47, a dozen fellow teenagers and I spent a week a hundred miles from any other living soul. 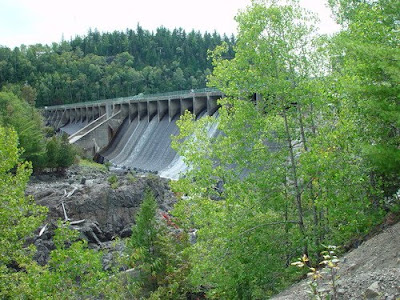 The Ripogenus Dam weather station was decommissioned in 1995.

So for ten years, GISS reported temperature readings from a station that didn't exist. How? Filnet.

Part of the USHCN data is created by a computer program called “filnet” which estimates missing values. According to the NOAA, filnet works by using a weighted average of values from neighboring stations. In this example, data was created for a no longer existing station from surrounding stations, which in this case as the same evaluation noted were all subject to microclimate and urban bias, no longer adjusted for. Note the rise in temperatures after this before the best sited truly rural station in Maine was closed.

"Urban bias" is the technical term for when a weather station reads artificially high temperatures because the station is situated in an urban location where there are lots of buildings and parking lots to absorb the heat from the sun. Filnet took temperature readings from other weather stations - stations in urban locations where reading are higher because of the surrounding asphalt heat collectors - and used it for the most rural station in the state.

Remember how 1998 was the "warmest year in a millenium"? Well, it was warmer than it would have been if the Ripogenus Dam's readings hadn't come from Millinocket.

The question is: just how unreliable is the data? Lots.

How can we trust NOAA/NASA/Hadley assessment of global changes given these and the other data integrity issues? Given that Hadley has destroyed old original data because they were running out of room in their data cabinet, can we ever hope to reconstruct the real truth?

Given that there are only 30 or 40 stations that have been providing temperature readings from the Civil War up to today, given that "adjustments" are made to the temperature data via an arcane and opaque process and may represent most or all of the warming in the 20th Century, given that scientists refuse to release their data (or the raw - unadjusted - data has been destroyed), given how some of the data sets rely on tree rings from a single tree, how can we trust the data?

The Ripogenus Dam weather station was giving ghost readings for a decade. How many other non-existent weather stations are still generating new data? The World wonders.

Part of the USHCN data is created by a computer program called “filnet” which estimates missing values.

Part of the USHCN data is created by a computer program called “filnet” which made up missing values to better reflect what we wanted it to say.

I am unconvinced. There's one critical question that I don't see answered anywhere: how accurate was the FILNET extrapolated data? If you go back to the days when the Ripogenus Dam station was operating, and run FILNET extrapolations from other Maine stations for that time period, then how well do the extrapolations match up with the actual station data?

Wolfwalker, you may be right - there are all sorts of ways that this might not change the overall results.

But doesn't look like the folks on the warming side of the tracks are spending time on quality control for the data.

This isn't the first time that an analysis has shown the data to have strangeness, by any means. I have another example you can see in a post tomorrow.

It's gotten to where I could do a post every day about how dodgy the data is. Does this mean that the data can't say that things are warming? Of course not. But after the third or fourth time where you see something not add up, suspicion is justified.

But doesn't look like the folks on the warming side of the tracks are spending time on quality control for the data.

I don't know that for sure. Do you? Are you familiar with their methodology? Do you know what QC procedures they apply?

Yeah, there's a lot of bad data being thrown around. Thing is, it's coming from both sides. I don't believe every argument advanced to support AGW is valid. But by the same token, I don't believe that all of them are invalid either. Nor do I believe that pro-AGW scientists are all either liars or idiots.

It doesn't matter. If the data isn't an accurate portrayal of actual conditions, it isn't data. It's opinion.

If the adjustments are off by one hundredth of one degree C per year, the data set more than accounts for all of the claimed temperature increase. Do you really think that ANY adjustment of the data is within that margin?

Do you really think that ANY adjustment of the data is within that margin?

No. And the "justification" given for the adjustments is not justified by anyone that I've read.