Charlie Daniels - The Devil Went Down To Georgia 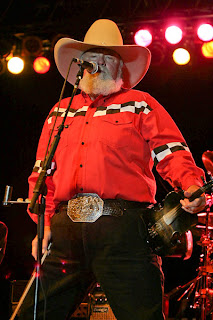 Platinum hit. #3 on the Rock charts. Grammy award. The final challenge on Rock Band III. An episode of Futurama. Not exactly how the world usually reacts to a Country song.

The world doesn't often see someone like Charlie Daniels.

Six Platinum/multi-Platinum albums and 3 Gold albums shows that he's no stranger to the Country Music scene - as does his induction into the Grand Ole Opry a couple years ago.

This song is without doubt his biggest hit. I must confess that it really wasn't my cup of tea when it came out in 1979, but it has struck a chord in the music world - the song that's launched a thousand spinoffs. It is also without doubt the greatest Country music song for Halloween.

The devil went down to Georgia, he was looking for a soul to steal.
He was in a bind 'cos he was way behind: he was willin' to make a deal.
When he came across this young man sawin' on a fiddle and playin' it hot.
And the devil jumped upon a hickory stump and said: "Boy let me tell you what:
"I bet you didn't know it, but I'm a fiddle player too.
"And if you'd care to take a dare, I'll make a bet with you.
"Now you play a pretty good fiddle, boy, but give the devil his due:
"I bet a fiddle of gold against your soul, 'cos I think I'm better than you."
The boy said: "My name's Johnny and it might be a sin,
"But I'll take your bet, your gonna regret, 'cos I'm the best that's ever been."

Johnny you rosin up your bow and play your fiddle hard.
'Cos hells broke loose in Georgia and the devil deals it hard.
And if you win you get this shiny fiddle made of gold.
But if you lose, the devil gets your soul.

The devil opened up his case and he said: "I'll start this show."
And fire flew from his fingertips as he resined up his bow.
And he pulled the bow across his strings and it made an evil hiss.
Then a band of demons joined in and it sounded something like this.
When the devil finished, Johnny said: "Well you're pretty good ol' son.
"But if you'll sit down in that chair, right there, and let me show you how its done."

Fire on the mount, run boys, run.
The devil's in the house of the risin' sun.
Chicken in the bread pin, pickin' out dough.
"Granny, does your dog bite?"
"No, child, no."

The devil bowed his head because he knew that he'd been beat.
He laid that golden fiddle on the ground at Johnny's feet.
Johnny said: "Devil just come on back if you ever want to try again.
"I told you once, you son of a bitch, I'm the best that's ever been."

And he played fire on the mount, run boys, run.
The devil's in the house of the risin' sun.
Chicken in the bread pin pickin' out dough.
"Granny, does your dog bite?"
"No, child, no."

Not exactly how the world usually reacts to a Country song.

That's 'cause it isn't Country music the way, oh, Hank Williams or Kenny Rogers is Country music. Charlie Daniels doesn't sing a lot of country. He belongs to a different tradition: the mix of Appalachian folk music with Southern R&B that produced the first rock artists, back in the mid-1950s. "Southern rock," some people call it.

Wolfwalker, I agree. The terms are overly-broad, underly-specific, and so always give me something interesting to post on Saturday!

Now that song is going to be in my head all day. Good choice!

I found some lost CDs the other day. One of them was CDB, including The Devil Went Down to Georgia, Long Haired Country Boy (one of my favorites), Uneasy Rider, and The South's Gonna Do It Again.

It's in the Jeep now. I play something from it almost every day.

That's one of my favorite songs. Great fiddle playing never goes out of style.

TOTW: have you ever heard another CDB song called "Talk To Me Fiddle?"

I have a dumb question : Does anyone know which album, besides 'Urban Cowboy' Charlie Daniels sings 'son of a bitch' instead of 'son of a gun' in 'Devil Goes Down to Georgia?

Anybody know which lp he sings 'son of a bitch' instead of 'son of a gun' besides the Urban Cowboy soundtrack?