The 95 Theses of Steve McIntyre 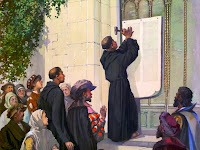 Something very strange is happening in the Scientific community right now - something healthy. We see a rejection of Received Wisdom, and in particular of Received Wisdom imparted by a closed circle of the anointed few. We see demands to see the data behind the theory of Anthropogenic Global Warming (the assertion that mankind's burning of fossil fuels releases carbon dioxide into the atmosphere, triggering a runaway temperature increase).

We've seen this sort of thing before. Martin Luther posted his 95 Theses to the door of All Saint's Church in Wittenburg on All Saint's Eve (Halloween), 1517. Driven by outrage at financial corruption in the Roman Catholic Church, Luther launched the Reformation, perhaps the greatest devolution of centralized intellectual power ever seen. Faith was henceforth a private, not a public matter, to be accepted or rejected by each individual. More importantly, the sources (especially the Bible) were published in the vernacular, rather than Latin. In a pre-literate world, this was the first opportunity most people had to hear the text that was the ostensible foundation of their religion.

Luther's revolution boiled down to see for yourself and make up your own mind. A closed priesthood could no longer keep you out of Heaven.

Steve McIntyre is, in many ways, the Scientific Community's Martin Luther. By insisting on examining the data and computer source code - and by refusing to accept "no" for an answer - he single-handedly blew Michael Mann's "Hockey Stick" out of the water. He is the reason that you don't hear about the Hockey Stick any more.

McIntyre asks of the Scientific establishment what Luther asked of the Church hierarchy: let everyone see for themselves, and make up their own minds. For a Reformation, as it were, from today's over credentialed academic establishment to an earlier and more vigorous day when participation was encouraged from a very broad section of educated society (think Committees of Correspondence, now enabled via the Internet).

The reaction, not surprisingly, is exactly what Luther saw. The "discussion" about AGW degenerates almost immediately into pronouncements of anathema. The whole "scientific" discussion is now as diseased as the Diet of Worms, as the establishment does what establishments do: try to suppress external voices that threaten the establishment.

McIntyre has a long presentation on the history of the Hockey Stick that should be the starting point for anyone interested in the failings of the Scientific Priesthood. The central issue is the refusal of Mann et al to correct mistakes in their analyses, and rather double down (to the point that Mann refused a demand from Congress for the algorithm that he developed as a public employee).

For me, this debate has become concrete since I find that people link to some of my AGW posts (thanks, Weer'd!). This last week I followed an incoming referral back to a site called OneUtah, and a thread that was debating the BBC's skeptical story "What Happened To Global Warming?" I ended up having a quite polite exchange with Richard Warnick, who seems a decent bloke (this is in stark contrast to the last time at a different site). But it very quickly became obvious that Richard and I were arguing past each other (politely, to be sure, but past each other nonetheless). He insisted on ignoring all but scientists with "peer-reviewed" articles. He was looking only for Priests.

Me, I don't care. If you have an argument, and are willing to put it out where I can see it, I'll read it. While I'm not a climate scientist, I'm confident enough that I can follow a spirited debate. Having been published in the technical literature in my own field of expertise (Internet Security), I'm not willing to cede all quality control to the 3 or 4 reviewers in "peer review". Indeed, McIntyre makes this point forcefully in his Ohio presentation:

I wondered about this in early 2003 in the most casual possible fashion. I thought that it would be interesting to look at the underlying data, rather as I might look at drill data from a mining promotion. Business was slow and I browsed the internet for a due diligence package. I could not locate such a due diligence package nor the underlying proxy data for MBH98. Out of the blue (I was then a Canadian businessman unknown to climate scientists), I emailed Michael Mann, the primary author, inquiring as to the location of the MBH98 proxy data.

To my astonishment, Mann replied that he had “forgotten” the exact location, but that an associate would locate it for me. The associate said that the data did not exist in any one location, but that he would get it together for me. I was dumbfounded. Here was a study that had been on the front page of the IPCC study, used in brochures sent to every household in Canada and there was no due diligence package.

You don't need to think that the whole AGW issue is being used as a political football by Big Environment to advance their policy preferences, or by lots - perhaps the majority - of scientists to get government research grants (although there's ample reason to be suspicious on both counts). The refusal of many scientists to disclose their data does violence to the entire scientific method. The insistence on listening to only a small subset of voices is not only unworthy of college underclassmen (My scientist is Red Hot; your scientist ain't diddly-squat), it's borderline religious in nature.

You may trust a priesthood. As for me, I'll continue to use the intelligence and good sense that the Lord gave to me. Hier stehe ich; ich kann nicht anders.

The global warming "consensus" is all about telling us to stop talking and bow to expertise. That pose is laughable in a world of new media where you can no longer turn off the comments.

Well put. I don't mind if a couple of scientists make a little religion of this, but I absolutely object to their influencing policy to meet their agenda.

Honest scientists put their data and methods out front for the world to see. Charlatans don't.

As a famous family member of mine, Roger Bacon (no, he did not have kids, but he was from quite a family, of which I share a last name and coat of arms) would say, The scientific method needs to be acknowledged from ALL sides, and it needs to be respected, all of the time, and at any cost.

Want to read an absolutely fantastic book on the man and the subject of the scientific method? Read "The Friar and the Cipher"

So you know, it may interest you that this book deals in code breaking, among other things.. I highly recommend it.

TOTWTYTR, you must be a denier or something. But we already knew that. ;-)

Tangalor, that book looks right up my alley. Thanks for the pointer.

Cool gig. I could send it to you if'n ya don't wanna pay for it. I've read it a few times, so my copy is well worn, but in good condition. Email me if this is up yer proverbial alley ;)

Only for trade of another book, though. :P