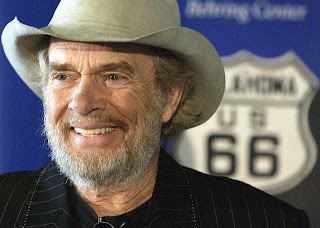 Radio was more interesting back in the days before the Marketing types divided it into genres (Rock, Country, Classical) and then divided it some more (Metal, Outlaw Country), and then again (Thrash, Screamo). It used to be that you'd hear a lot of different kinds of songs - The Beatles, followed by Johnny Cash.

I grew up in a house that had all sorts of music, and where music was on all the time. Johnny Cash, Ledbelly, Dvorak, Dylan, Joan Baez, Glenn Miller - if you didn't find something there that you liked, your just didn't like music.

I asked Mom if there was a Country artist that she and dad listened to, that I could profile here on Saturday Redneck. She said Merle Haggard. Smart lady - we haven't seen him here yet. And if you're talkin' Merle with your mama, then you're talkin' Mama Tried.

This was one of his first big hits, and it was autobiographical. Haggard's father died when he was young, and he soon was getting into trouble with the law. Quite frankly, he was a punk - in jail four times before he was 18, and even running a brewing operation while behind bars. He credits Johnny Cash for turning his life around: he saw Cash perform in San Quentin, and decided to straighten up and focus on his music, initially in the prison band.

There's a story that he saw Cash a number of years later at a concert, and told him how much he had enjoyed the show. Cash said "Merle, I don't recall that you were in the band." Haggard replied, "Johnny, I wasn't in the band; I was in the audience."

In 1972, California Governor Ronald Reagan pardoned him for all past crimes. Haggard said "It's not everyone who goes from Public Enemy Number 1 to Man Of The Year in the space of a decade."

The first thing I remember knowing,
Was a lonesome whistle blowing,
And a young un's dream of growing up to ride;
On a freight train leaving town,
Not knowing where I'm bound,
No-one could change my mind but Mama tried.
One and only rebel child,
From a family, meek and mild:
My Mama seemed to know what lay in store.
Despite all my Sunday learning,
Towards the bad, I kept on turning.
'Til Mama couldn't hold me anymore.

And I turned twenty-one in prison doing life without parole.
No-one could steer me right but Mama tried, Mama tried.
Mama tried to raise me better, but her pleading, I denied.
That leaves only me to blame 'cos Mama tried.

Dear old Daddy, rest his soul,
Left my Mom a heavy load;
She tried so very hard to fill his shoes.
Working hours without rest,
Wanted me to have the best.
She tried to raise me right but I refused.

And I turned twenty-one in prison doing life without parole.
No-one could steer me right but Mama tried, Mama tried.
Mama tried to raise me better, but her pleading, I denied.
That leaves only me to blame 'cos Mama tried.

Brings back some memories; that was always one of my favorites of his.

One of my favorite Haggard songs. I think he does it so well because it's so autobiographical.

You bring up a great point about the crossing of genre lines. Rock is pop is country is blues is jazz.

Some "country" singers, such as Patsy Cline and Marty Robbins had hits on the pop and country charts at the same time for the same song.

My daughter like "Take These Chains" by Ray Charles. Only he didn't write it, Hank Sr. did. Rearrange the song, use different instruments and a rock song can become a blues or country song. Or the other way around. It's all good.