There's a difference between climate and weather. For a while, I've been wondering what the trend is in record temperatures - the hottest or coldest days recorded. For any given location, these aren't too meaningful. Even for regions, it's hard to see relevance without a long period of readings.

But what about the records for everywhere in the country? Probably you'd want to see them over a decent time interval, too.

I haven't found that historical archive, but I did find a site that posts weekly records as reported to the National Weather Service. 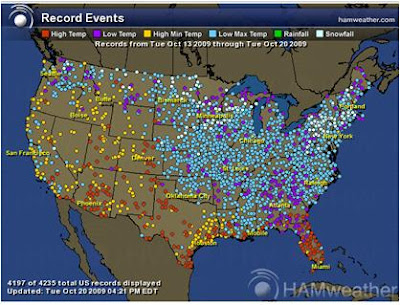 It's interesting stuff - click through to the map, which is interactive. Depending on when you click, you may or may not see the same data (they update their map pretty regularly). This is as of 20 October 2009 04:21 PDT.

Here's what the dots mean:

White - Record snowfall (most of these seem to be records due to early date of snowfall, rather than deep accumulations) (143 stations)

Pretty much everywhere north and east of the Red river saw record cold. The mountain states and Texas saw record heat. Overall, record low beat record high by around four to one.

What does this saw about Global Warming? Nothing, really. However, it's pretty interesting. Run back over 80 years, I think that the records (high vs low) would give a very interesting view of whether we were seeing a hockey stick or not.

Hat tip: Watts Up With That, where there is this very interesting comment:

If, as some warmist suggest, the world temperature has risen by upwards of 2 degrees C in the past 100 years; then no (new) low temperature records should be possible.

I guess we can put that claim to bed.

It would be interesting to see how the distribution of low and high temperature records occurs. Is there a pattern between rural and urban?

Unless Global Warming leads to a greater spread between high and low temperatures, this seems highly counter-intuitive. Or there's no clear warming signal. Should be pretty easy to see if the spread is increasing.
Posted by Borepatch

Yes. The UHI effect (Urban Heat Island) means that its often warmer in cities due to that concrete, glass and steel soaking up the heat made by cars, AC exhaust, heating units, etc. Also cities are known for temperature inversions (gets warmer as you go up instead of colder).

Temperature records should come from units that take into account UHI or other factors, but I have read that many of them do not.