Kill the dog for Mother Gaia

And if you have to scare some little kids half to death doing it, well ometlete/eggs and all that:

The UK government has decided to convince us all that climate change is real. To this end it is spending £6 million on a prime time advertising campaign featuring a father reading a bedtime story about the evil carbon dioxide monster created by grown ups which is making rabbits cry.

Taxpayers are paying £6m so their children can be scared out of their wits. It's not Halloween, but a new climate change TV advertising campaign that begins tonight, which features a young girl watching a dog drown. 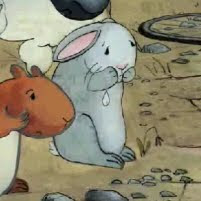 Seems people just aren't responding to all the ZOMG-we're-all-gonna-diiiieeee!!!1!! Global Warming messages that government is sending out. So the UK.Gov is going to send it out again. Harder.

Going to give it to the little kids, good and hard. There's a name for people who do that, and it's not very nice.

The only silver lining that I can see in this is that it's the UK taxpayers being screwed so that their kids can have nightmares. Not me or my kids. Of course, #1 Son and #2 Son would probably howl with laughter at this claptrap, but they're not the target demographic.

Decide for yourself. And ask yourself what the Usual Suspects would be saying if this was from the Left Behind people.

I almost wet myself laughing when the advert came on the other night.

Then I got angry.

What f*kweasels - this just proves even further that it's a Religion, not Science.
What a bunch of Polanskis.