The Second Amendment: the Political is Personal

The 1960s saw the battle cry The Personal is Political, as a rallying cry for social agitation.  Personal preference gave rise to political movements, some for the better and some for the worse.  Well, that street runs both ways - political actions can - and should - lead to personal acts in response.

A year ago today, I began a post describing the political actions of the Town of Arlington, MA:


I've linked several times to posts over at the blog Dispatches from TJICistan.  TJIC is an outspoken (some might say extremely so) advocate of smaller government.  He's also a firearms owner in the People's Republic of Massachusetts.  While he owns guns, it appears that he's no longer allowed to possess any

Massachusetts' gun control laws are in my opinion unconstitutional, since they give each town's Police Chief complete discretion to decide who can possess firearms, who can't, and why not.  Arlington revoked TJIC's enumerated right to keep arms, without so much as charging him with any crime.  Indeed, they could not, because the words that they objected to are clearly constitutionally protected.

It was a political act, intended to make an example of him.  Well, the Political is Personal:


Brad_In_MA emails to point out that Thursday is the anniversary of the epic screwing of TJIC by the People's Soviet of Massachusetts*.  He has a call to action that is filled with win:

I propose a Jan 19 BUYcott of anything 2a related, in support of JTIC.  Mind putting up such a post?  I plan on getting a few targets and a brick of some .22lr range ammo for my ruger 22/45, aka Miss Cherry.  The idea is to BUY something.  Anything.  Price does not matter.  Quantity does not matter.  In short, a simple request for a simple action to support a Brother in Need.

I would go one step further, and suggest a buycott (the opposite of a boycott, 'natch, where you purposely buy from someone as opposed to refusing to buy from them).  As it turns out, TJIC is an entrepreneur, and has a company that makes this easy for everyone:  Smartflix.

And so the call goes out.  Pass it on.  And look at SmartFlix, and point it out to your friends.  There's good stuff there.  Let's all stress his servers on January 19.

Let's put our own money where it will do some good defend the Second Amendment.  TJIC is fighting our battle. 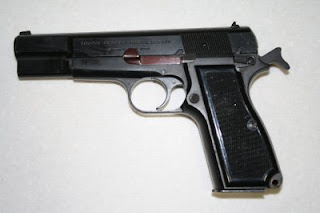 He describes this sweet heater's virtues, which are legion:

Browning Hi-Power/P-35
Belgium made.
A finish unknown to me. Possibly ceramic.
3-dot sights.
13 rounds of 9mm goodness to say "Up yours." to officious ... um ... officials everywhere.

The Arlington Police Department - arming citizens all over the country!
Posted by Borepatch

That case would be a good one for a lawyer that wants to make some good case law. Since 2A is a right, and TJIC committed no crime, this would be a great case. Perhaps he should contact some heavyweights like SAF or Gura.

"they give each town's Police Chief complete discretion to decide who can possess firearms, who can't, and why not" - which sounds like a perfect recipe for tyranny.

BP,
Bought some ammo and gun oil this morning. Will soon be ordering a couple disks from SmartFlix.

Never understood why Ken over at Popehat didn't go all "KEN SMASH!" on the Arlington police department when this came up. It seems right up his alley.

Thanks guys, I appreciate the support!

One of the really aggravating things about this fight is how slow it's going, and how I have to keep my mouth shut until it's done.

I can't wait for it to wrap up, so I can tell you all the twists and turns, the government lies, the lawyer bills, and more.

Thanks again for keeping me in your thoughts.

> Never understood why Ken over at Popehat didn't go all "KEN SMASH!" on the Arlington police department

All will be revealed at some point.

Haven't got any videos, yet, but here's my purchase.

I bought a set of reloading dies yesterday, for the Mosin. And made a donation to the NRA.

Am I to assume that there is some clandestine "KEN SMASH" action going down over there? Oh goody, it's like Christmas, what with all the anticipation and such.