ASM826 emails this (well, emailed, past tense, a million years ago) flashback to by youth: 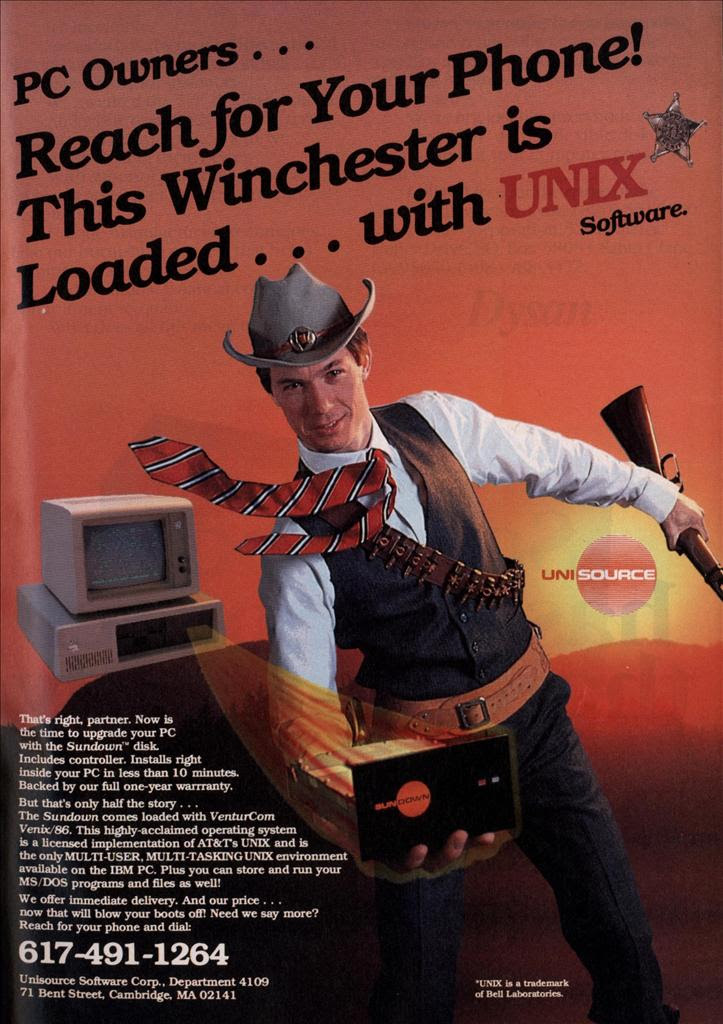 Reading it, I was suddenly 25 again.  I thought I was the hottest guy in town, because my PC had a 5 MB (removable!!!) Syquist hard drive!  Three Letter Intelligence Agency loved them, because you could get all classified and Top Secret and everything all day long, and then lock it in the safe when you went home.  Yeah, it wasn't a proper Winchester Drive (the original name came from the nickname of IBM's dual 30 MB Mainframe drives - 30-30, get it?), but it was on a PC!

Of course, they wrecked me for life there, introducing me to Multix (the precursor of Unix) and then Xenix (Unix for IBM PCs) and we were off to the races.

Over the years, I've had Coherent (a Unix for PCs from the late 1980s), PC-VMS (I can still probably whack together a DCL script; back in the day I could read DECnet traces), and then on to Slackware and a 0.99 Linux kernel.  25 floppy disks, and you had to build your own kernel.

But I love this ad, from back when Boston's Rt-128 really was "America's Technology Highway" and giving Silicon Valley a run for its money.  And yeah, we wore neck ties, with three piece suits.  Err, and had hair, and everything.

Labels: i am a nerd, me me me, techie geekdom, techpr0n

Show up with a tie in the Valley in those days...
1) On an interview
2) Selling something
3) East-coast engineer

Did you wear a bandoleer with your suit though? Loaded with pens, pencils, and different colored markers, maybe?

Because that would be awesome!

Coming from the East Coast, I had an interview with a large search engine company in Silicon Valley a few years ago. I pretty much had to force myself not to wear a jacket to the interview, but I essentially got laughed at by the first interviewer because I was wearing a tie.

Chad, unfortunately that's why you're unlikely to date Mrs. Borepatch.

Not retro enough. I've been writing BASIC on one of these:

More power than a Franklin ACE!!!1!

What! You never did time on CP/M?

I basically left the OS/2 and Windows world with Slackware and the 0.97 Linux kernel. But I was use to swapping in and out a stack of floppies as my day job was with Netware, which linked the kernel as you installed the software (2.15 anyway, 3x got away from that).

Ah, yes, I vividly remember the Syquist drives (though mine were the 44 MB ones, not the 5 MB ones).

I also vividly remember the sound those cartridges made as they failed...

I'm with Dwight... I had FOUR of those damn things (all classified) in hopes of getting just ONE to actually work at any given time... sigh

"You guys rock." Yes, are definitely the cool kids. :)

Just wanted to point out that the company that made the iconic IMSAI from War Games is still around.
http://www.imsai.net/Default.htm

Man, I've worked at THREE different start ups within a brief saunter from there.

It's crazy how small the world is.