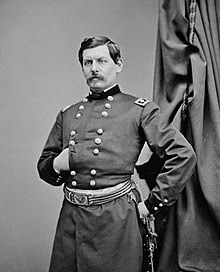 George McClellan was in charge of the Army of the Potomac from July 1861 until November 1862.  An able administrator, he turned the post-Bull Run Army of the Potomac from a rag tag mass of whipped militia into a professional fighting force.  It's probably not going too far to say that he laid the foundation upon which the ultimate Union victory lay.

But he was cautious to a fault.  While nicknamed "The Little Napoleon" (from his preferred poses for the new fangled photographers of the day), he refused to implement Napoleon's dictum for success on the battlefield: l'audace, l'audace. toujours l'audace!*

And so Robert E. Lee was able to play him like a fiddle.  Lee took over command of the Army of Northern Virginia in June of 1862 when its former commander Joseph Johnston was wounded.  Lee was not then held in high regard, his stock having fallen from its pre-war heights.  Lee soon put that to rest.  In a stunning series of tactical assaults called The Seven Days, Lee essentially lost eight battles in seven days, at which point McClellan loaded his entire army on naval transport and sailed back to Washington, defeated.

Lee wasn't attacking the Army of the Potomac, he was attacking McClellan.  No matter how good an administrator and organizer McClellan was, he couldn't fight effectively.

Actually, that's not true - he was very effective in fighting his own organization, and especially his commander in chief.  His insubordination was the least of it (he once kept Lincoln waiting 30 minutes when the President came to call, and then had Lincoln informed that he had gone to bed and couldn't see him).  He wouldn't fight.  There was always a reason why - he didn't have enough men, he didn't have enough supplies, the weather was bad.  Lincoln once summoned a council of war of McClellan's generals - pointedly without McClellan himself - saying that if McClellan wasn't using the army he'd like to borrow it for a while.

Finally, McClellan went too far, and Lincoln fired him.  Whether for revenge, or because of his weakness for flattery, he ran against Lincoln in the 1864 elections.  Grant and Sherman won that for Lincoln.  Unlike McClellan, they would fight.

Newt Gingrich just handed Mitt Romney his tail end, utterly demolishing the myth of Romney's inevitability.  Watching this unfold, and looking at Romney's impressive organizational skills, his rich war chest, and his support from the entire GOP establishment, I cannot stop thinking about George McClellan reviewing the Army of the Potomac.  Crisp new uniforms, polished brass, snappy salutes, and brave martial music from the marching bands made for a pretty - and a pretty impressive - sight.

It was a sight that contrasted with Ulysses S. Grant, whose appearance was slovenly, and whose personal faults almost lost him his command.  Everyone in the Union Army establishment wanted to get rid of him in 1862.  Everyone but Abraham Lincoln who said I can't spare him.  He fights.

Ulysses S. Gingrich just won a lopsided victory against all odds.  He did it because while he possesses many personal faults when compared to his opponent, he possesses one outstanding virtue.

It's a long, long road to the Republican Convention, and anything can happen.  It's hard to say who will be the nominee.  But it's not at all hard to see the Obama Campaign attacking not the GOP, but their General should the timid and overly calculating Romney get the nod**.  If Newt is the standard bearer, then it will be a real rumble.

Shelby Foote, in his incomparable history The Civil War: A Narrative writes about the Union Army after they had been thrashed at the beginning of the Wilderness Campaign in 1864.  Dejected - they always knew that Bobby Lee drove them back after a single battle - they prepared to march back to Washington.  Instead, the order came down the line to turn south.  A cheer rose up, as men who had been whipped squared their shoulders and turned to chase their foe.  That's the kind of leader Grant was.

That's the kind that Newt is, too.


To the surprise of the V Corps men, the march was south, in rear of Hancock's portion of the line.  At first they thought that this was done to get them on the plank road, leading east towards Chancellorsville, but when they slogged past the intersection they knew that what they were headed for was not the Rapidan or the Rappahannock, but another battle somewhere south, beyond the unsuspecting rebel flank.  Formerly glum, the column now began to buzz with talk.  Packs were lighter; the step quickened, spirits rose with the growing realization that they were stealing another march on old man Lee.  Then came cheers, as a group on horseback - "Give way, give way to the right," one of the riders kept calling to the soldiers on the road - doubled the column at a fast walk, equipment jingling.  In the head was Grant, a vague, stoop-shouldered figure, undersized on Cincinnati, the largest of his mounts ...

** Apologies to all true Sons and Daughters of Dixie for casting Obama in the role of Robert E. Lee.
Posted by Borepatch

Newt was living in a former Congressman's spare room while in Iowa. Sure, it was probably nicer than most hotels, but he's been running on a shoestring budget compared to Willard.

I just don't see how Newt gets enough votes from the mudgy Middle 33% of voters. If he's the Repub candidate I'll hold my nose and vote for him, but I don't like the idea of him as Prez, and I don't think he can do it.

Bore, you have got it right with Newt! I don't care that he is "angry". This country is very close to being finished. We are electing a president, not husband (for all you ladies that think he is fat, ugly, stupid name), not friend, not nice guy, not cute, etc. We need a warrior. Americans are pu**ies. They watch their country being destroyed and want to elect Romney, another puss. Previous commenters don't seem to realize that this is the end of America. No more time to fiddle while Rome burns. Time to fight.

Grant may or may not have been a good general, but he was a lousy politician. His was one of the worst administrations until obama. However, we do need a fighter, not obama lite. What a quandry.

Secesh said it:Romney is Obama-lite. He is slick and insincere and I'm glad the primaries are stil wide open...
Jerry Pournelle (go read his chaosmanor blog)has been pushing Newt, more as a personal friend but clearly as the more able candidate.
Cheers
Differ.

I've stood at that intersection of The Plank Road. Nearby is the site of The Last Meeting.
I'm sure my use of uppercase shows my Virginia education.
Newt fights and Mitt panders (more so that most).
Are we on the path to a brokered convention? Too early to tell.
Virginia's primary is coming up and I'm still pissed that Fred Thompson dropped out before our last primary. Over 20% of Virginia primary voters in 2008 voted for Fred rather than McCain.

Even raised a Yankee, I can't compare Obooma to Gen Lee. By all accounts, Gen Lee was an honorable and competent gentleman.

But your point is well-taken.