And a great darkness descended upon the land

Pharaoh (Austin's own [Republican] Congressman Lamar Smith) has hardened his heart, and intends to bind us to the RIAA with the mighty chains of the SOPA and PIPA legislation.  And so a great darkness descends upon the land.

Peter rounds up the SOPA legislation Internet General Strike.  I agree with him - this is important.  The Internet has become mission critical, and has revolutionized politics throughout the world.  Turning the keys of the greatest communications medium ever devised by the mind of man over to Dinosaurs stuck in a dieing business model (that would be both the RIAA and the Dinosaur Political Parties) is madness.

It is, indeed, ceding the Promised Land to Pharaoh.

And so today I join the Internet General Strike.  This is a taste of what the Internet will be, should SOPA and PIPA become law of the land.  The Internet Ice Cream Machine is clenching its fist in Solidarity with Peter, Wikipedia, and all believers in truth and freedom.

I would gently remind my readers, though, that they should gaze upon Rep. Lamar Smith.  See, with eyes of seeing.  The GOP is not your friend.  Yea, they bring down darkness across the land. 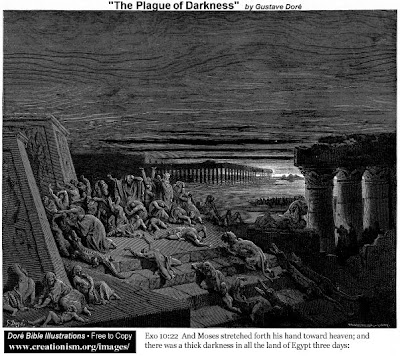 I will be back tomorrow, after our Industrial Action.  I urge my fellow bloggers to join me in going dark today.  Join us, and shoulder to shoulder we will face down the Moloch State.  Show Rep. Lamar Smith (R-TX) that we will not go gently into that good night of central control.  We don't think it is for our good, or society's.


For it will be very difficult to persuade men of sense that he who with dry eyes and satisfaction of mind can deliver his brother to the executioner to be burnt alive, does sincerely and heartily concern himself to save that brother from the flames of hell in the world to come.

The Dinosaurs smell a change on the breeze.  They roar their defiance, but we don't care.

UPDATE:  You need to watch this.


PROTECT IP / SOPA Breaks The Internet from Fight for the Future on Vimeo.

There is a form here that you can enter your address and email, and it will email your Senators.  If you do this, you should change the wording in the body.

As curious as I am to see what the unintended consequences of SOPA/PIPA would be (knowing how the internet treats censorship, I'm sure it'd be a hoot), I think it's a bad idea that needs to be quelled now. Yes, copyrights need to be defensible, but blowing holes in a perfectly good network because somebody thinks they saw a pirate's shadow isn't the way to do it.

A co-worker came up with an interesting idea for a protest. He suggests that major online services and vendors pick a day to refuse to honor connection requests from IP addresses in D.C.

Austin has more than it's share of evil politicians, but Lamar Smith hails from San Antonio:

And I suggest that somebody take this opportunity to primary him...