They went on to say that “This study does not mean that using tree rings to infer past climate is flawed as we can still see the effect of temperatures on the rings…”, but according to MM05 [McIntyre & McKittrick 2005 - Borepatch] below, that doesn’t seem to be fully accurate.

Long time readers know my scorn for the Michael Mann "Hockey Stick" graph used - with great fanfare - to justify the late 1990s ZOMG Thermageddon!!!1!!eleventy! schtick.  The statistical method was bogus, producing a hockey stick graph even when fed random data (say, the phone numbers in your local Telephone Directory), and Mann used Bristlecone Pine tree core data, which was known to be inappropriate for measuring temperature.

At the time, we thought it was because it measured drought, not temperature (which is true).  Now, it seems that it also measures sheep, which were introduced into the American southwest in large numbers right when the Hockey Stick bent upwards.

Take lousy data, run it through lousy computer algorithms, and you get a nifty excuse for a multi-trillion dollar government power grab. 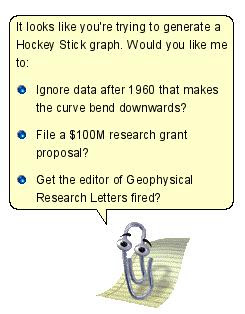 Stupid Deniers, back on my lawn.  Hey you lot: clear off!
Posted by Borepatch

We need to regulate and control/tax all big businesses to avoid the horrors of:

Maybe if they weren't so desperately interested in the $100M Presidential research grant in Global Marxist Redistribution of Wealth, they wouldn't have overreached so heavily.
Besides, Obama won and he's busy wrecking the US economy to complete the prize money.