"I have 4 million bodyguards."

King Olav V of Norway was famously athletic,winning a gold medal (in sailing) in the 1928 Summer Olympic Games.  He was also an accomplished skier, jumping from the Holmenkillbakken ski jump.  He is also perhaps the most popular monarch of my lifetime, no doubt in no small measure due to this sort of thing: 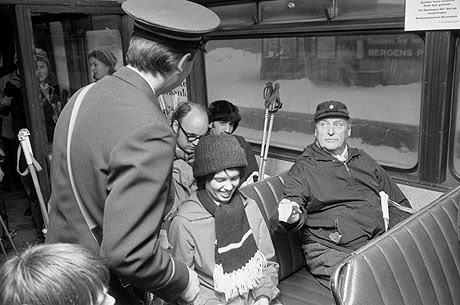 He was photographed trying to pay for his own ticket on the train.  He was on the train because it was the 1973 energy crisis (this was before the North Sea oil discoveries) and while he could have had a royal allotment of petrol, he took the same transport that his subjects had to.  He also famously refused to drive in the "public transport" highway lanes, even though as sovereign he was entitled to.  He took no bodyguards when he went skiing - only his dog - and when asked why not, he replied that the entire country had his back.

Deservedly so - they recognized on of their own.  Would that our own governing elite take his example to heart.
Posted by Borepatch

Wasn't he the one who, when asked for ID while writing a check at a store, pulled a coin out of his pocket and showed it's face to the clerk and said, "that's me"?

As I recall the clerk wouldn't accept it.

Noblesse Oblige seems (not surprisingly) to be a concept that our elected servants and oligarchs have never heard of. Way back at the turn of the 20th Century and even 6 decades later, it was a concept taught and even praised by teachers of both the arts and social studies......especially in the religious teachings of the day. Sadly it has fallen to the wayside of things like political correctness and statism.
The current system will have to fall into total tyranny before we can begin, as slaves, to once again strive for the light of freedom and self discipline.

A perhaps apocryphal story of George Washington has it that a British merchant noticed a tall man strolling down the street.

"Who is that distinguished gentleman," the Englishman asked of his companion, "He walks like a king."

"That is our President, George Washington," was the reply.

"But where is his guard," gasped the amazed merchant.

Unfortunately, Washington may have been the last President to be held in that high regard.

It is most certainly a lesson the current ... speech reader could use.