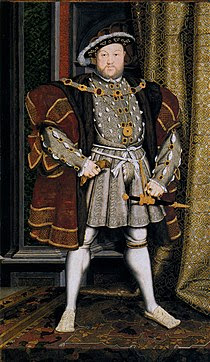 Henry VIII is undoubtedly most famous for the Herman's Hermits song of the 1960s (Second verse, same as the first).  But in addition to founding his own church and chopping off his wives' heads, he was very much a Renaissance Man.

Born the year before Columbus discovered Terra Nova, he was raised and educated to be a Renaissance Gentleman.  That included a wide range of knowledge (thus our current term Renaissance Man) - siege artillery and musical composition.

In fact, his compositions are some of the oldest we still have.  Preserved in the British Royal archives, they are played here by the Krainis Recorder Consort.  The Youtube page has a quite good introduction, which I reproduce here:


Two compositions for recorders by Henry VIII, King of England 1509-1547-- 'If Love Now Reynyd [Reigned]' and an untitled work-- played by the Krainis Recorder Consort on a Kapp long-playing disc, KCL9049, issued in 1960.

As far as his association with music is concerned, Henry the Eighth is probably best known these days for graciously lending his name to a song celebrating serial marriage, made a hit by Herman's Hermits. But, because 2009 marks the 500th Anniversary of Henry's accession to the throne, it seems appropriate to consider a more direct contribution.
In the album liner notes, Bernard Krainis, recorder soloist of the New York Pro Musica, which he co-founded, and director of the Consort performing here, says--

"It is perhaps paradoxical that two such lovely works should come from the pen of a monarch whom history depicts as bloodthirsty, callous and self-indulgent. Henry, however, was a typical Renaissance Humanist, whose wide ranging interests included a passionate devotion to music. At his death, he owned 76 recorders-- just a small part of his princely collection of all the important instruments of his day."

The source for this music is a manuscript at the British Museum. The portrait of Henry, in 1540, is by Hans Holbein the Younger.

Shakespeare would no doubt have heard this, or music very much like it.

Flanders & Swann once did a song/skit piece around the idea that Henry VIII wrote the very well known instrumental tune called "Greensleeves." History says otherwise, but it's a really funny bit nonetheless.

That was a nice bit of appropriate music for me. I'm currently at Pennsic, so it themes in nicely. The Droid phone I was using to listen to it? Not so much.

If only Nero's compositions had survived. _That_ would be quite a concert.

Elmo, I'd love to see Caligula's