Gustav Holst - Mars, the Bringer of War (from the Planets suite) 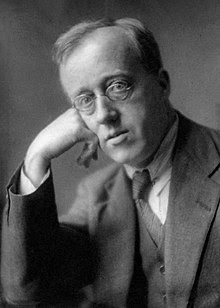 What does it take to rescue you from Strauss and Wagner?  If you're Gustav Holst, it's Ralph (pronounced "Raiff") Vaughn Williams and his English Country tunes,  Walt Whitman, and Indian Vedic Philosophy.

And as some of you expect, Holst is at the absolute top of the list of "Classical Composers I'd like to buy a pint" ...

Because despite his German name, Holst was English to the core.  Born in Cheltenham, I missed his birthplace when I was visiting GCHQ (the UK's NSA).  I also missed his ashes, which are buried in Chichester Cathedral - my second favorite English Cathedral (after Winchester).  Obviously, I grievously neglected my Holst Appreciation during our sojourn in Her Britannic Magesty's Scepter'd Isle.

The Planets was Holst's greatest work, and Mars was perhaps the most recognizable part of that suite.  It's perennially green, as generation after generation find that it accompanies and inspires new sources of wonder.

As it does today, and we see that while one door closes, and another opens.  The venerable Space Shuttle (which took its maiden flight when I was in College) is now performing its last orbits.  Some people are waxing sentimental on this end, perhaps despite themselves:


I know what a bureaucratically-crippled, politically-logrolled white elephant the whole Shuttle program was from the start...

...but I'll get a little choked up all the same.

If you're going to steal money from me at gunpoint, promise me you'll use it to do cool stuff like shake the ground with thunder and punch holes through the sky.

Nobody does inspirational like NASA, and while the manned space program has given us heros, the most inspirational bit of what they've done is visiting other planets.  When you think of that, you (deservedly) think "USA" and "NASA".  And nothing says "visiting another planet" like the Mars Rover Spirit, which outlived its designed mission limit by six years.

Spirit finally got stuck in soft sand and no longer responds to commands from the Jet Propulsion Laboratory.  But one door closes, but another remains open:  Opportunity continues its exploration of another damn planet.  Bravo.

Holst died in 1934, when cutting edge space exploration was being done by Robert Goddard.  However, I like to think that he'd like this video of the mission to Mars, Bringer Of War.  I'd sure like to chat with him over a pint about this.

That was a good one! And proof that NASA CAN do things right...

Mars, the Bringer of War has influenced a lot of film composers. Check out Kevin Costner's Wyatt Earp, when the Earps and Doc Holliday are walking down to the OK Corral. Or Gladiator, there are scenes there that are influenced by this piece. Any time you have war/battle scenes in film, it's easy for the composer to borrow from this piece.

Of The Planets, my favorite is Jupiter, the Bringer of Jollity. I'd love to conduct that one. It's a shame that Holst composed this work before Pluto was discovered, I'd have loved to have heard Pluto, the Bringer of Death.

But this is such a great phrase:
"...shake the ground with thunder and punch holes through the sky."

Even though we've given up (only for now I suspect) manned launch, NASA is still apparently working on outside-LEO un-manned exploration projects.