Prediction is very hard, especially about the future

Let's look at some extrapolations, shall we?


This one from 1986 on temperature increase in America:


Hansen said the average U.S. temperature had risen from one to two degrees since 1958 and is predicted to increase an additional 3 or 4 degrees sometime between 2010 and 2020.
The Press-Courier (Milwaukee) June 11 1986

Staying in 1986 for the moment, we have this unequivocal prediction:


“Within 15 years,” said Goddard Space Flight Honcho James Hansen, “global temperatures will rise to a level which hasn’t existed on earth for 100,000 years”.
The News and Courier, June 17th 1986


…the world’s population will stabilise at nearly 15.5 billion…about a century hence… [around 2070]

Almost half a century has passed since then. The radical change that was said to be so necessary was not undertaken (the book proposed everything from a ban on road building to the invention of “a new philosophy of life”).

So how accurate was that population prognostication? Recently the United Nations issued a press release that contains a rather different prediction:


The current world population of close to 7 billion is projected to reach 10.1 billion in the next ninety years… [around 2100]


About that AGW you’ve been asking us to pay Trillion$ to stop…Fuck you!

Gee…All that extra CO2 in the last decade and how much warming? Zip! Zero! Nada!

The biggest weakness of the ZOMG-Thermageddon!!!1!! crowd is that their shelf life has expired.  It worked with the public for a bit during a run of hot summers in the 1990s, but it's been failed prediction after failed prediction ever since.  Numbers get revised, and then revised again, and even with a Press that's happy to sell the Establishment Line, the public isn't buying it.


I think that this is likely another example where an ideological Press led the Left to think that they could get away with more than they actually could.  Kyoto was supposed to be the start, but there simply wasn't public support for it.  The Copenhagen talks collapsed spectacularly last winter, showing that there wasn't public support anywhere in the world.  The Oz.Gov is now on a death watch because they - against the advice of the grown ups in the party - pushed through a massively unpopular Carbon Tax thinking they could talk everyone into supporting it: 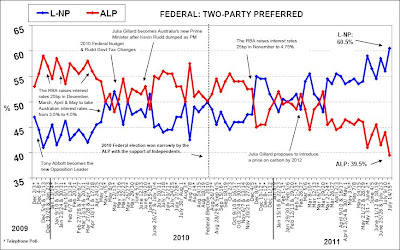 You might say that Prime Minister Julia Gillard isn't doing a good job of hiding the decline.


So in the spirit of predicting some things (like the future), let me offer up two of my own:

1. Governments that make like Australia will be updating RESUME.DOC soon after.  You'll notice that the Democratic controlled Congress didn't vote on a Cap And Trade bill in the 2008-2009 session, showing that they are collectively smarter than Julia Gillard and her Oz Labor Party.  Please don't forget to turn off the light when you clear out the PM's office, Julia.  We're trying to be Green and everything.

2. A generation from now, people will look back on this age with a sense of wonder that the science could have become so corrupted.  The reputation of the major establishment scientists - Hansen, Mike Mann (of Hockey Stick fame), and Phil "hide the decline" Jones - will be held up as examples of charlatans.  The science will ultimately correct, since the public won't stand for the Green Agenda that's currently being pushed as "science".  After the dust settles and the budgets reset, there won't be anyone to stick up for the Gang Of Three's reputations.
Posted by Borepatch

I used to always take comfort in the idea that science was self-correcting: at any given moment it might be very wrong, but over the long term it will correct.

But that's only true if the scientific process has integrity. The worst crime of the CRU Tape Letters wasn't the "trick to hide the decline", it was destroying the peer review process. For that alone, Phil Jones, Michael Mann and James Hansen should be stripped of their degrees, their pensions revoked and their ability to work in science again. Srsly. I take my science very, very seriously and what they did is inexcusable. These guys need to put in an honest day's work digging ditches or something.

Trouble is, all "science" will be disavowed by the general public.

This climate farce has had so much publicity and political fall-out (in the form of taxes and restrictions in the name of "green") for the past 15-20 years that little true science will be trusted for a long time. Read "funding". While other nations will take over.