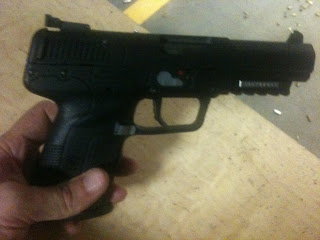 I must say that I'm a little mystified by this pistol.  I'll get to that in a bit, but first let me offer a quick overview of its virtues: it's light weight but solidly built, it has very low recoil, it points nicely in the hand, it has good factory sights, and it has a perfectly adequate trigger (meaning that if you like the Glock-style trigger with lots of takeup and crisp reset, you'll like this; if you like the 1911 style trigger, you might not).


Oh, and it's plenty accurate: 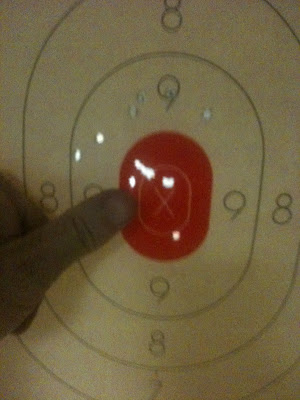 This pistol certainly seems to do the job.

But as I said, I just don't get this pistol.  I don't understand what it's for.  It fires these: 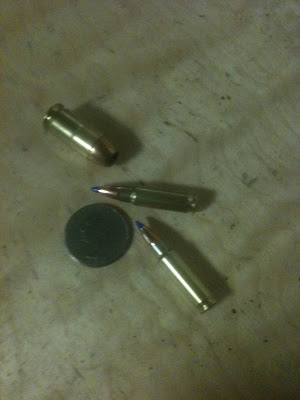 These are the FN 5.7 x 28 mm cartridges it's chambered for, with a quarter and a .45 ACP for scale.  Hornets.  Fast hornets: 23 grain bullets will fly downrange at 2800 fps (!).  It's really the opposite of the .45 shown here, which is ten times the weight and less than a third the muzzle velocity.

And for the life of me, I can't imagine what you'd want this for.

Sure, in a rifle, it looks like it'd be a fine varmit cartridge, along the lines of the .22 Hornet.  The velocity would keep it flat shooting out to a couple hundred yards, I'd think.  What value that has in a pistol is beyond me.

The Brady crowd is annoyed by this pistol, and periodically comes out with hyper-ventilating oh noes it's teh armor piercing ammo!!!1!!eleventy!

Only problem with this is that the ATF says it's not armor piercing.

Oh yeah, and it's fifty cents a shot, so you're paying ten times what you'd pay for .22 LR.  As an intellectual exercise, it was fascinating, but I don't see one taking up space in my gun safe any time soon.


I'm not any kind of gun or shooting expert. I like shooting, and shoot a fair number of different guns, but I'm really a dilettante. Your mileage may vary, void where prohibited, do not remove tag under penalty of law.

FWIW, I'm not a gun or shooting expert either, and I came to the same conclusions.

It's an answer in search of a problem. Small caliber, wicked fast cartridge. Nice little gun, felt good in my hand, but expen$ive as all get out to play with.

There are advantages to owning the calibers everyone else does.

same disclaimer for me, but I watched a show about the development of the M16 a while back and they had the exact same concerns, small caliber bullet, high velocity. What they found is that bullet tumbled once it hit the tango and did a lot of damage.

Gotta agree with Graybeard... in the PS90 those rounds make sense, but NOT in a pistol...

Graybeard and Old NFO, I think this would be a sweet rifle cartridge, if a bit spendy. And hard to suppress, if you wanted to use a can.

But the pistol bit had me scratching my head. Still does.

kx59, I'm skeptical of the whole "tumbling bullet" thing. We had lots of evidence from the sandbox that Our Guys would shoot a Tango 5 or 6 times and he'd keep coming. Maybe the Tango would have bled out eventually, but it seems we lost some guys in Fallujah and elsewhere because the poodleshooter won't put 'em in the dirt.

Quite frankly, if you feel the need for a lot of full auto in an urban setting, I'd think that an M3 Grease Gun would be the ticket. But that's me.

The 5.7 cartridge was developed for the P90 as an AP round (available only for the military, I know). After FN had sold enough P90s, they decided they'd try for a pistol version. A pistol firing AP ammo to go with your SMG/PDW seemed like a good idea for the military.
As for why there's enough demand outside of military circles for a pistol that you can't get AP ammo for, the blame/credit goes to the pistols appearance in various video games and movies. Sort of like the Desert Eagle in that respect.

The FN 5.7x28mm was designed for the FN P90 personal defense weapon (PDW), as an armor-piercing alternative the pistol ammo (9mm) used in submachine-guns.

So, yeah, using the civilian not-really-armor-piercing ammo in a pistol, with its shorter barrel, does seem like a bit of a waste, since it won't go through serious body armor — but it will go through light armor, heavy winter clothing, etc.

And it worked all too well against our soldiers at Ft. Hood.

My understanding is that light, fast rounds are devastating if they hit bone and unpredictable otherwise. Sometimes they tumble and cause spectacular injuries; other times they go right through and leave a quarter-inch channel.

You can carry a lot of ammo for this gun. And if you go read the Five-seveN forums, you'll find that there are LEOs who carry this gun.

Does the magazine drop free on yours? My experience is that they do not.

I don't understand what this is for.

Why, it's for those who want the most technologically advanced weapon on the market!

The FN Five-seveN is merely the weapon designed around the 5.7mm cartridge. The 5.7mm was designed as a proposed replacement for the 9mm Parabellum. The 9mm has been around for a very long time (1902), and is actually fairly heavy for the performance characteristics.

As the decades, or century, went by, ballistics engineers realized that ammunition can be tailor-made for better performance. In the 1980s, NATO suggested a cartridge that would outperform the 9mm (itself, as you recall, only recently replacing the .45 acp), provide more bang for the buck, and be physically smaller (to reduce weight and allow a larger magazine without increasing the grip of the weapon). The 5.7mmX28 was one proposal, and it underwent testing starting in 2002 (the H&K 3.6mmx30 was another). The 5.7mm easily won out as the better, but logistical problems with NATO members shelved the idea of replacing the 9mm.

However, FN--so certain they had a hit--began to produce the weapon to select customers to off-set their R&D costs. (Hey, it passed NATO trials with flying colors. It isn't FN's fault it didn't go global.) The weapon is much more popular around the world than the average shooter realizes: lots of spooky characters carry them. Over time, civilian interest increased, and FN were no dummies: they knew civilians would buy more of these than law enforcement and military, and so produced a civilian version.

The problem, as you suspect, is that the civilian version does not perform nearly as well as the non-civilian version (although it it's still pretty good!). I've shot both the pistol and the rifle, and thought it did very well. Of course, it's not as popular, so ammo costs are ridiculously high in ranges. I think that is slowing its adoption by the average shooter.

Andy, I don't recall anything unusual with the magazine. But I wasn't paying a ton of attention to that, so I might have missed it.

@Czar, if I were on the front lines and had AP ammo, and was up against someone in body armor, it might be different. So I might not understand the design goals because I'm not the target customer.

One other attractive item you observed on the Five-seveN was the fact that it had a tac rail, so it could be equipped with a bayonet...

IIRC, the idea behind the pistol was simply so that militaries using the P90 would have ammunition compatibility between their longarms and sidearms.

In fact, my understanding is that one of the main factors behind the development of the FN 5.7 x 28 mm cartridge was that it would be primarily designed for the rifle, but had to be practical in a pistol as well. Both weapons and the cartridge were designed together as an integrated system, though the pistol was delayed for several years after the P90 was released.

" I don't understand what this is for."

It's for FN to sell for a nice profit.

Did you try mine at NE Bloggershoot? Jay G did, and I don't think he was taken by it. I thought it would be interesting to have, though it is not my favorite. I certainly carries a lot of rounds, 20 plus 1.
I have a bunch of SS192 ammo which everyone thought would become rare and valuable. I would like a SBR version of the PS90 because they look cool, and have an interesting magazine system, but I have a bunch of other guns I would get before that.
I used to read the Five Seven forum, until I realized a lot of the contributors were full of you- know-what.
I'll bring mine to the 2011 shoot if anyone cares to try it.

@Borepatch: I hate it when you make me disagree with myself. (joking). The feedback from Somalia (Black Hawk Down) was the same. The rounds were passing through the skinnies, which ran off into the side alleys and they couldn't tell if they hit the target or not.

Libertyman, I don't remember shooting yours. Of course, there were enough guns to invade Canada, so I might have missed it. But this one is such an interesting conundrum that I don't think so.

TBG, there's clearly a design defect, because if you moust both a flashlight and a bayonet, the blade will be in the way of the light and you'll have to stab the Tango in the dark. That will make JayG cross.

IIRC the issue that got the hoplophobes' collective panties in a bunch is that the SS190 ammunition IS armor-piercing--which the linked page says it is. But the SS190 isn't available to civilians, but the Brady Bunch conveniently neglected to mention that.

Don't you know, the marketing positive term for armor piercing is "anti-terrorist"?

The 5.7x28mm cartridge was in fact designed to be capable of penetrating some types of soft body armor. However, the firearm in which it was designed for use was a short barreled carbine with a 10.5" barrel. The AP cartridge (SS190) with the steel penetrator has been documented by the RCMP to penetrate a Type II vest when fired from a barrel of this length.

The ATF's determination of armor piercing follows the federal law's definition, which has nothing to do with actual ability to penetrate armor. The definition [18 U.S.C. Section 921(a)(17)(B)] is concerned solely with the construction of the bullet. The AP bullet does not meet this definition, because it has an aluminum core (with a steel penetrator), which is why FNH's restriction of the AP round is voluntary.

The SS192 and SS196 that are available to civilians have been tested by FNH and found not to penetrate Type II body armor when fired from the Five-seveN's 4" barrel.

One benefit of the round is capacity. In the Five-seveN, it has a 20rd capacity in an unextended magazine. The P90/PS90 has a 50rd magazine.

Speaking for myself, I own one specifically because it is a likely target for a ban. How's that?

Also, it's my mom's favorite gun to shoot.