Dennis from Dragon Leather Works has an interesting idea - what if you could have a holster that would work rigged inside your belt (for those times when you want to be all covert) as well as outside your belt (say, for when you're at a Texas Barbecue)?  Obviously, the Barbecue bit means that you're showing off the pretty thing.

So he made one thats pretty:

And he sent one to me to try out.  It's said to be here now, so you'll hear about it in a while - I'm quite excited to have a holster that won't suck.

Dennis calls it the "Quantum" - you can't know where it will be.  Hmmm, said I: that sort of insanely fun  geekiness calls for some retro The Gimp love: 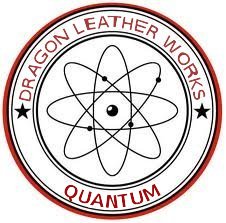 That's the simple one.  But you know me - why stop at simple when you can get all complex: 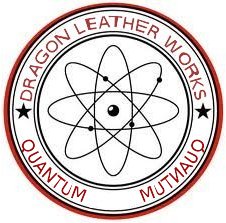 After all, it's for a Barbecue, right?  People will know it's time to stop hitting the Shiner Bock when they can't figure it out.  And so, how about a poll?

Ever the tragic geek, instead of a planetary looking atom, I'd have p-orbitals, or something weirder from quantum theory. It would be darned tough to engrave in leather, but this image would be cool. Of course, 99.9% of the population would have no idea what it is.

That aside, I've always wanted to try a custom pancake leather holster that holds a gun really close to you, but never wanted to drop a lot of bucks for the experiment. Mrs. Graybeard just got a Crossbreed Mini-tuck to carry her Taurus Slim, and I tried it myself. That thing is so darned comfortable you forget you have it on within seconds, and it disappears to the outside world.

I like the design but would prefer low visibility black clips instead of chrome.