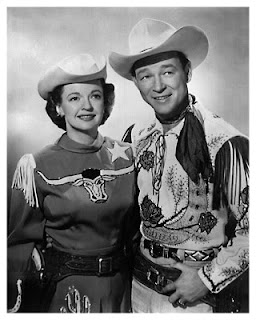 He broke the mold.

Roy Rogers was one of my heros when I was young - I spent many a saturday morning in front of the TV, watching the Roy Rogers Show. Cowboys were the big thing, and the shows were full of six shooters and horseback chases. Some would have a song from Roy, although that wasn't my favorite part.

That's a shame, because he had quite the singing career. While the Frontier had been closed for sixty years, the days of the open range were still in living memory in the 1940s and 1950s, and Roy captured that nostalgia, of camaraderie around the open fire.

Skyball Paint was one of his less well known songs, but one that really captures this moment, as the Cowboy began to fade from America's imagination, replaced by the Astronaut.

Old Sky Ball Paint was a devil’s saint, his eyes were a fiery red.
Good men have tried this horse to ride
And all of them are dead.
Now I won’t brag but I rode this nag till his blood began to boil.
Then I hit the ground and I ate three pound
Of good old Texas soil.

So I swore, by heck, I’d break his neck for the jolt he gave my pride.
I threw my noose on that old cayuse
And once more took a ride.
He turned around and soon I found his head where his tail should be
So I sez, sez I, perhaps he’s shy
Or he just don’t care for me.

In town one day I chanced to stray upon old Cross-Eyed Jim.
For a whoop and a holler and a counterfeit dollar
I sold the nag to him.
But when he plants the seat of his pants in Sky Ball’s leather chair,
I’ll bet four bits when Sky Ball quits
That Jim will not be there.

I had never known until researching this post that Roy and Dale Evans had had a daughter, Robin. She died an infant from complications from Down's Syndrome. Dale wrote about it in Angel Unaware. Dale was the one who wrote Happy Trails, shortly before Robin's death.


RIP Roy and Dale, until we meet again. I always chose you over those Spacemen, anyway.

UPDATE 27 February 12:22: Highpkts emails to point to this video of the song, which is Made Of Awesome and covered with Awesomesauce:

Roy and Dale were true role models and heros. If only we had such role models for our kids today.

The muppets make everything more awesome.