And by "stupid", I mean "really stupid". From His Snarkiness, we see:

Obama’s Director of National Intelligence, Dennis Blair said today that U.S. intelligence community has authority to target American citizens for assassination if they present a direct terrorist threat to the United States.

Wow, combine this with the Obama critics are terrorists thing and suddenly I feel a chill in the air.

Here's why. Exhibit A for the prosecution: 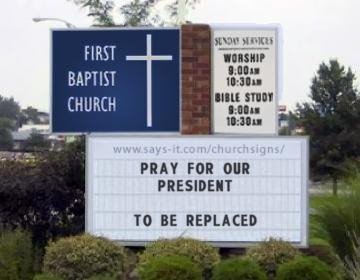 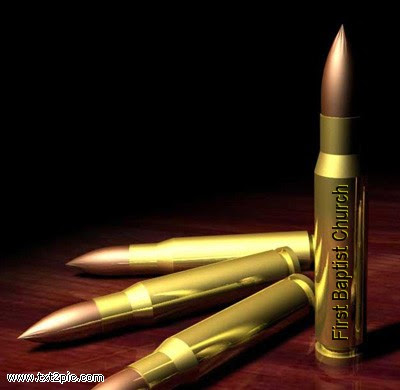 Mind you, I'm not saying that the Federales are fixin' to shoot up a church, just that's exactly what they're saying. So how can they be so stupid as to actually say it?

The media coverage lets them get away with saying it. That the media are biased is pretty much a given these days - polls a couple years ago showed that the American public thought (by a considerable margin) that the media were trying to get Obama elected. And the media admit that they're further to the left than the public. And this plays out in a way that leads to Democrats acting stupid.

Let's first (briefly) consider Republican stupidity. When it happens, it's quickly put on display for all to see. Case in point, Tom Tancredo's latest stupidity:

And, by the way, I think it was foolish of Tancredo to bring up literacy tests. They were used in some parts of the country in the past to keep black people (and poor white people) from voting. There are better ways to say that people were dumb/uninformed, and that's why they voted for Obama, if that's what Tancredo meant to say. Maybe he did intend to resonate with racism, or he has fond feelings about the bad old days. Who knows? In any case, in complaining about people being dumb, he was dumb.

All over the TV. And frankly, it should be - after all, Tancredo's a presidential hopeful; he may be in (or running) the Fed.Gov.

So where's the press about John Brennan, Assistant to the President and Deputy National Security Advisor for Homeland Security and Counterterrorism? You know, they guy who said this:

Politically motivated criticism and unfounded fear-mongering only serve the goals of al-Qaeda.

And so Republicans learn to be more circumspect than they would otherwise be, and Democrats learn to be less circumspect than they would be. And so they say stuff that's stupid. Look at Robert Gibbs, for crying out loud - he's the President's Press Secretary. Look at Joe Biden. John Kerry: I was for it before I was against it. These are the leaders of the party, remember. I only say this because I'm a bitter clinger.

This might not make much difference if the media weren't imploding. But the media is imploding. The media can no longer control the discussion in this country; case in point, the Tea Parties. Despite wretched, biased coverage (calling them "tea baggers", racists, crazies, etc), the media can't sell the message:

While people who are official members of Tea Party organizations and those who attend Tea Parties are relatively few, those who are generally sympathetic to their cause are many. In fact, taken together, these three groups comprise 47% of likely voters according to our latest survey. Senator Scott Brown's assertion that he could not win with a mere support of the Tea Party Movement misses this larger point: Tea Party activists can elect few people but Tea Party supporters can elect many more and winning without at least some of the Tea Party sympathetic vote is, at the present moment, a tall order.

And so, back to why Mr. Brennan's comment on political criticism is so incredibly, unbelievably, unforgivably stupid. Zogby again:

The data suggests that terrorism can be used to reinforce unity among Tea Partiers while scoring legitimate points with detractors. And it appears that Republicans are increasingly recognizing this and might have already utilized it in the recent Massachusetts election. Politico reported that Brown's advisers thought the "terrorism issue actually broke more in Brown's favor than did his opposition to Obama's health care reform plan."

The administration should sack him, because this sort of thing can coalesce the current amorphous factions into a steamroller. The level of distrust this country has against the elites is like nothing I've ever seen, and is like a super saturated solution. All it takes is a single, tiny seed crystal to cause everything to precipitate out of solution, dumping on whatever happens to be underneath. The media, of course, are paid up members of the elite.

Like I said, I don't believe that the Fed.Gov is fixin' to put my name on a bullet. I do think that the Obama administration is filled with an astonishing number of hacks that are itching to flex the muscles of the Organs of the State. And that they're too stupid (yes, that's the right word) to know just what a whirlwind that they're sowing.

Too stupid, all the way to the very top. The media has let them get away with too much, for too long. These old habits have led the Democrats to the very edge of the cliff, and they don't have a clue that it's happened. Grab the popcorn, because it's going to be an interesting year.

The level of distrust this country has against the elites is like nothing I've ever seen, and is like a super saturated solution.

I don't believe that. Not yet. The people of America have been conditioned to be sheep. Psychologically, the elites still hold all the high cards.

Wolfwalker, we will see - later this year. It's been Bad Moon Rising for the news media for several years now, we've seen revolts against political elites already (2006 and 2008, against the Republicans).

This year it will be the Democrat's turn.

Still, I don't see this as "Anti-Democrat". I see it as another round of "Anti Elite", and don't see any sign that it will end any time soon.

The labeling on my cartridges is non-denominational.

Toaster, those days are over. It's an interesting thought (and maybe a post) about how much of the Clinton administration was the cause of the loss of trust.

Probably not all that much - the Internet has simply exposed what likely had been going on for years and years. Probably.

You need to get that FID post haste, my friend.

Things are about to get ugly.

Just my gut feeling. The fact that they're DARING to say this, to put it out in the public venue, tells me they're itching for something.

What Tancredo said was stupid. Because literacy tests were a function of the Democratic party, not the GOP (the latter opposed literacy tests as well as all Jim Crow laws). It's what made Condi Rice's father a die-hard Republican.

Liberals are definitely attempting to spin this as a throwback to "GOP" ideas, when history says the reverse was true.

Ian, this will be interesting indeed.

Czar, you are correct that the media has turned the history of political racism on its head. It's absurd that they think it's normal to say that up is down and down is up, but that just illustrates my point. Tancredo should have been more on his guard, as Republicans generally are. And Democrats think that they can do anything, because the media has always turned the narrative around in the past.