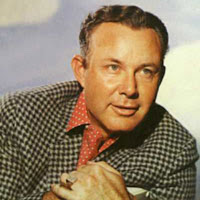 We forget that storms can kill. Today is seeing record-breaking snow in the eastern USA. While beautiful, we should keep in mind that snowfall - especially heavy snowfall - can be deadly. Fortunately, there's a Country Music song to remind us.

"Gentleman Jim" Reeves was part of the "Nashville Sound", the Country/Pop wave of the 1960s that included Patsy Cline. Reeves was a Texas boy, trying his hand unsuccessfully at shipbuilding and minor league baseball until he got a break in Country radio. His more reflective style of music stood out from the crowd, and found considerable success on both the Country and the Popular charts.

He was almost more of a crooner - perhaps more in the style of a Perry Como or Bing Crosby than your typical cowboy singer of the day. Coming out of nowhere in 1959, he became an overnight sensation world wide (he recorded some songs in Afrikaans for the South African market). Then he flew his airplane into a thunderstorm. Storms can kill, and this one did. Dead at 40, in 1964.

For some reason that's one of my least favorite Jim Reeves songs. I can't say why, because it's not as if unhappy songs by him were exactly rare.

Still, like all of his songs, it was beautifully sung.

I listened to Jim Reeves lots growing up but not much any more. I've fond memories from the music so don't know why? I've always liked his cover of Roger Young but that more for the Heinlein connection than anything else.

Love his voice. I didn't realize that he died the year I was born.

Some of my earliest music memories are of my Mom playing Jim Reeves on the big console record player we had in the living room.

Worldwide sensation is right, my dad grew up listening to Jim Reeves in India. The Blizzard is one of my favorite Reeves songs.

Ditto for me too Borepatch!
I remember many a freezin' mornin' standing beside the old wood burning stove back in pre-disney Florida trying to warm up before walking to school, with Mema playing Jim Reeves and the Statler Brothers.

And the smell of fresh biscuits and gravy filling the air!

I remember when he was killed; my mom was a big fan of his. He did have a beautiful voice.