Using computers to translate speech has long been a goal of the Intelligence community, and is said to have produced hilarious results:

In the early 1960s, an apocryphal tale went around about a computer that the CIA had built to translate between English and Russian: to test the machine, the programmers decided to have it translate a phrase into Russian and then translate the result back into English, to see if they'd get the same words they started with. The director of the CIA was invited to do the honors; the programmers all gathered expectantly around the console to watch as the director typed in the test words: "Out of sight, out of mind." The computer silently ground through its calculations. Hours passed. Then, suddenly, magnetic tapes whirred, lights blinked, and a printer clattered out the result: "Invisible insanity.

GOOGLE is developing software for the first phone capable of translating foreign languages almost instantly — like the Babel Fish in The Hitchhiker’s Guide to the Galaxy.

By building on existing technologies in voice recognition and automatic translation, Google hopes to have a basic system ready within a couple of years. If it works, it could eventually transform communication among speakers of the world’s 6,000-plus languages.

Best of luck to them. Remember, Google's strength is harnessing the Wisdom of Crowds. Typically, the masses are right, but sometimes are very, very wrong: 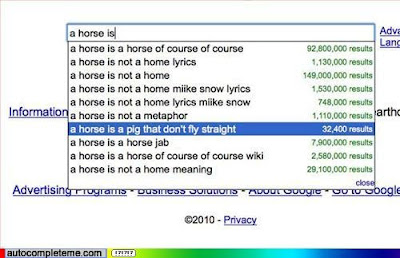 As I said, good luck to them. I hope they figure out how to prevent attacks on the system, or people's cell phones will be full of eels:

Via Slashdot, where the comments are pretty interesting. And funny.
Posted by Borepatch

Oh dear. The potential for disa... humour is incredible.

That highlighted line sounds like a mangled quote from Scarface.

Frank Lopez: You know what a chazzer is?
Tony Montana: No, Frank, you tell me. What is a chazzer?
Frank Lopez: It's a Yiddish word for "pig." See, the guy, he wants more than what he needs. He don't fly straight no more.

The same is claimed of Esperanto, but this certainly does work.