Good on ya, cobber! 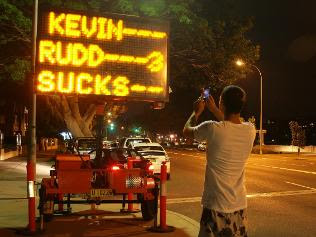 Made of awesome, and covered with awesomesauce:

CHEEKY protesters have hacked into a large illuminated traffic sign to declare to passing motorists that "Kevin Rudd sucks".

Sydney police are baffled how the political protesters hacked into the road sign's controls in leafy Rose Bay in Sydney, the Daily Telegraph reports.

"Baffled"? Err, we've seen this sort of thing before: 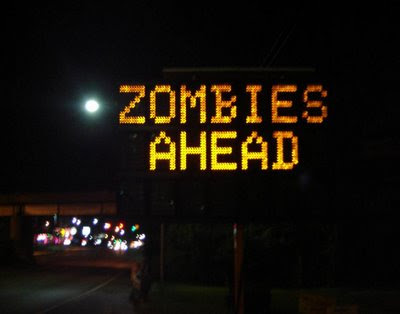 But full marks the the Lads for getting politically involved. I mean, you really can't "up the system" when you're playing Zombiepocalypse on the X-Box.

But the dramatical sign on a major arterial road in the city has proven a traffic stopper.

Locals have been stopping their cars to take photographs, and the sign causing such a major distraction that the police were called in at 3am today.

Police officers were forced to used bolt cutters to reach the the sign's power box sign to turn off the lights, and preserve the Prime Minister's honour.

Note to American readers: Kevin Rudd is the Prime Minister of Australia.

Labels: heh, made of win, zombies

There was another one that I saved off the internet that said, "YOU'LL NEVER GET TO WORK ON TIME! HAHA!"

I'm trying to think up a good one, but I'm afraid that my mind is looking forward to the weekend too much to think...