"Never forget how much I loved you."

#2 Son and I just got done watching the PBS/Ken Burns DVD set The Civil War. When we first started watching, I told him This is the best thing that's ever been filmed about the Civil War. I remembered it from the early 1990s, when I was a pretty run of the mill, liberal PBS viewer.

Some criticisms are easy. Ken Burns needs an editor, who can cut the nine episodes down to five. There's a lot of material here, but not only is it the most powerful; there's a lot that's less powerful.

There's a lot of Political Correctness here. Some of it is your expected, utterly lacking in subtlety and nuance, roll-your-eyes sort. But some of it was very different. The last episode is mostly - mostly - magic, describing the aftermath of the war and how the veterans tried (and sometimes succeeded) in getting on with their lives. The old movie-real filmclips of the ancient, battle-scarred veterans from the North and the South embracing each other at the 75th anniversary of Gettysburg is incredibly, astonishingly moving.

And then, it is followed by a modern historian talking about how the Civil War is still unfinished, "... so long as some live in houses and some are homeless."

I was surprised at my feelings at this point. While they did not turn to rage, they turned to something very like it. Turning this great National Trauma into a ventriloquist's dummy for modern political skirmishes seemed like digging up the graves of the old veterans. I guess that this is why I no longer watch PBS. 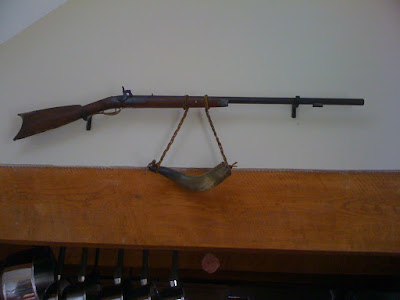 And yet it is a powerful, powerful video. The material is mostly from Shelby Foote's monumental The Civil War: A Narrative. It tells the story of the common soldier, and tells it well: at its best, it brings it to life in a way where the dust of the old books is forgotten, and the men speak in their own voices, for a short time returned as flesh and blood, hopes and dreams.

Perhaps it's that I'm older now, perhaps it's that I've lived in the South, but I believe that I understand this conflict better now than I did twenty years ago. While I still feel some vicarious pride at the exploits of my native state's Twentieth Maine at Little Round Top, I also feel the summer sun on Pickett's men, waiting for that terrible charge on the following day. I can see just how far this country has come, and how the South has not only reentered the Union, but in some significant ways has become the backbone of it.

I no longer feel the need to enlist those old veterans in modern battles, but rather let them remain who they were, in their own words.

But I had to come to this realization on my own. Still, while Ken Burns should have done more of this, the video is worth watching. Especially with your 14 year old son. I'll close with Foote, and while this passage from his master work was not included by Burns, the last episode captures its feel. Foote relates the words of Captain Holmes, from Keene New Hampshire, on one of the myriad of Memorial Day gatherings after the war's end:


But even if I am wrong, even if those who are to come after us are to forget all we hold dear, and the future is to teach and kindle its children in ways as yet unrevealed, it is enough for us that to us this day is dear and sacred ... For one hour, twice a year at least - at the regimental dinner, where the ghosts sit at table more numerous than the living, and on this day when we decorate their graves - the dead come back and live with us. I see them now, more than I can number, as once I saw them on this earth.

Through our great good fortune, in our youth our hearts were touched with fire. It was given to us at the onset that life is a profound and passionate thing. While we are permitted to scorn nothing but indifference, and do not pretend to undervalue the worldly rewards of ambition, we have seen with our own eyes, beyond and above the gold fields, the snowy heights of honor, and it is for us to bear the report to those who come after us.

I really need to watch that series, but haven't gotten around to it yet. If your kin was with Sherman near Vicksburg, our ties extend back well beyond Al Gore's Internet :) Although, I would imagine that you and I get along better than our elder's did - given the circumstances.

"I no longer feel the need to enlist those old veterans in modern battles, but rather let them remain who they were, in their own words."

That has to be the best thing I've read all week.

Paladin, I'd never heard that he was at Vicksburg - eastern Tennessee and Georgia, Shiloh, and the March to the Sea.

And it's a safe bet that you and I get along better than they would have, at least during and immediately after the war.

Later, who knows? The last episode of Burn's show is particularly moving in how it covers that. I'd encourage you to get it and watch it (I had the library get it for me, yay Library!).

And thanks - as always - for the kind words.

My great-great-grandfather also served in Sherman's army, and - as was the custom - named his firstborn son after his general. Great-grandpa was William Sherman Riggs. All of the 2X great uncles fought for the South.

And on their behalf, I'll say this: the South didn't re-enter the Union; it was dragged back, kicking and screaming. But forming its backbone? Oh heck yeah.

I was pleasantly surprised upon discovering that there were actually skirmishes here in San Jose CA. Borepatch.

Even went on to discover some grave sites and monuments here as well.

I suddenly came to the realization that this country was truly split directly in two halves from the east coast all the way to the west coast.

I also enjoyed that PBS special and like you am somewhat ambivalent about it, but enjoyed it all the same.

I've watched part of this over the years and enjoyed it for the most part. The parts I didn't enjoy were as you pointed out. The politicalization of history is truly disgusting.

The myth, now widely held, is that the North went to free the slaves. Although slavery was in the mix, it was not the primary cause of the war. If it were, Lincoln would have issued the Emancipation Proclamation in 1861, not 1862.

Last year I went with a couple of friends to Gettysburg. the first part of the experience was at the newly built Visitor Center. Part of that was a movie that concentrated only on slavery and spoke of the "legacy" of the Gettysburg into the modern era. Most annoying.

I tried watching Burns's "The Civil War" once, and turned it off within fifteen minutes or so. I have little interest in endless slow-pans across photographs of dead bodies, matched with slow funereal dirges. I also have little interest in background narrations that focus mainly on negatives and repeat the obvious as if it was a revelation. As a military historian, I'm more interested in the military aspects of the Civil War -- the campaigns, weapons, tactics and strategies, the ways in which the American Civil War forms a bridge between the 'classic' tactics and weapons of the Napoleonic Wars, and the newer tactics and weapons that reached their zenith in the First World War.

There's a lot of folks I know that know the names of their kin that served in the War of Northern Aggression. They know the units, and the commanders names, and where they fought.

If they thought it would hurt him, they'd be in favor digging up Sherman and hanging him as war criminal for crimes and atrocities against civilians.

Faulkner spoke for them: "The past is not dead. In fact, it's not even past."