I mentioned a few days ago that my list of "rifles I'd like to get" contains no rifles chambered for the same cartridge. In other words, all of the rifles use a different type of ammunition. This is planning FAIL, since I'd end up with a thousand rounds of ammo just to be able to plink for 30 minutes, and if the press is going to write ZOMG he had a THOUSAND ROUNDS OF AMMO!!!1!one! then you should at least have enough on hand for a decent range day with one of your rifles.

In any case, the Œcumenical Volgi (The Notorious ŒV) asked which rifles were on my short list. As a public service to the two people who care (The Volgi and me), here's the list. You'll quickly see that there's a common theme. 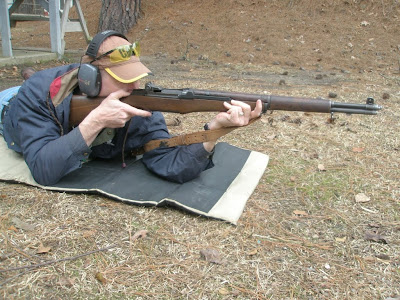 Man, what a rifle.

Although I'd look for one with a shorter barrel (Carbine length), the Winchester is perhaps the "American Rifle". Designed by The Man himself, John Moses Browning (Peace Be Upon Him), the greatest gun designer who ever lived.

The rifle of Empire.

Commie, which means constructed with questionable quality, but #2 Son wants one so badly that he can taste it. To Old To Work, Too Young To Retire let him shoot it at last summer's blogshoot, that that was all it took. Fortunately, they're cheap as chips, and the old Commie Mil-Surplus ammo is even cheaper.

Yes I know - not a rifle. Still, ho gun safe is complete without a shotgun for skeet/trap/burglars, and this is another John Browning (PBUH) design. The first semi-automatic shotgun, there are still a bunch around at more or less reasonable prices.

I confess that the AR does not move me the way the others do - it's black, plastic, ugly, and it's a much younger design (more on this in a minute). But it's infinitely accessorizable - sort of a Lego gun.

The (mostly) common thread here is pretty obvious. With the exception of the AR-15, these are all old rifles. Each of them is older than I am, and the Winchester is older than Dad (I'm talking about the design). There's history that whispers in your ear every time you line up the front sight on the target, and I'm a sucker for that.

Not to bad-mouth the AR, but it's a little, well, antiseptic in comparison. Accurate as all get out, sure. If I had to hump one of the rifles on a 20 mile, full-pack maneuver I'd want it (it weighs maybe half what the others do). But what you gain in practicality you pay for in loss of historical interest.

Still, that's the list. We're behind where we had originally planned to be in our rifle acquisitions, but Lord willing (and the creek don't rise), we'll start to fix that. After all, BAG Day is coming up.
Posted by Borepatch

All fine choices. The Enfield has been on my list for almost as long as I can remember. They are really affordable, but I keep moving it down the list in favor of something else and never seem to get around to it. Damned limited resources ;)

My SKS and my WASR both eat the same ammo, which is nice, although the mags don't interchange. The Saiga 7.62 that my Mrs. is saving for will share ammo AND magazines with the WASR (after a bit of tweeking).

I go through fits of Garand envy... I just never can seem to scrape together the cash to get one. CMP is very reasonable in its pricing of these awesome guns.. but dogcatcher budgets can be a pain.

I mentioned a few days ago that my list of "rifles I'd like to get" contains no rifles chambered for the same cartridge.

About the Auto-5, my uncle had one, it kicks like a mule because of the long-recoil operating system. Just fyi.

I've never owned a auto-5, but I guess they're a real pussycat to shoot if you keep the recoil system setup the way it's supposed to be - A5 Browning

For rifles I'd like a nice bolt action 7.62x39 to go with my semi-autos. I bought a metric crapton of brass cased rounds when they were still cheap, and handloading for a boltie would be fun. Maybe a CZ 527, or a enfield conversion.

Or if I won the lottery/went insane I'd pick up a M1 carbine just so I could add another cartridge to buy reloading dies/bullet molds/powder for. :P

Had a Garand and had to sell it. Want another.
The Lee Enfield, yes.
SKS, yes.
Have my AR-15, pieced together with the help of friends. It's fine.
The only shotgun I want is a Remington 870 with an 18" barrel and rifle sights. Had one, sold it, want another.

An AR built to the original drawing might be half the weight of an 1894, but not the one you've got pictured! :)

SKS: Not so much. Although I would like to get another mini-30

Daewoo DR-200: Check. Who needs a retro-engineered piston AR when you can get a purpose built piston .556 with AR fire controll, AR magazines and a FAL gas adjustment?

Now I'm gonna go buy a Springfield M1A (not a Garand, as I have rifles in exactly 3 calibers only because I have a 22LR, otherwise it'd be .308 and .223 only) just to make Sarah Brady cry some more *g*. And because I don't have one yet. NEED MORE BATTLE RIFLES!

SKS yes and enjoy it!

Want an M1 Garand carbine, like Dad carried in Korea, he talks about it a lot these days, wisheds he had one I think, need to look harder.
Quite apparent I need to add to this...

Nice list! Good to see another SMLE fan. Had hours of enjoyment from the Mk.4 - inexpensive too. But now I want an AR10 of some sort...

The list of "want" longarms is at least as long as the list of "have". Both are too long to list.
Near the top of my want list is in fact a Chilean Mauser, but I want it original and as it came in 7x57mm. That was the first milsurp I owned oh so many yrs ago and I wish I still had it. If I owned one, it would only be shot with low pressure hand loads. Those "3.08" mausers are really 7.62NATO which is a lower pressure round then most modern .308. Add that to the fact you are dealing with 110yr old metallurgy, and standard pressure .308 is pushing it right up to the pressures the gun was proofed at when it it brand new is more risk then I'm willing to take.
That site DirtCrashr linked to doesnt even mention if they are 1893 or 1895 Chilean Mausers. I would hope to hell they are 1895 vintage, because the 1893 versions don't even have the rear locking lug to help prevent the bolt from flying back into your face if the front lugs break from excessive pressure.

I have a .22 rifle that I started with, use to get others started in the Nation of Riflemen and still enjoy shooting every time I go to the range.

I have an SKS and I love it. Using the iron sights, shooting standing, offhand (not too much chicken wing) I can tickle the bullseye at 100 yards.

I also have a British LeeEnfield 303 that is kind of fun, but I'm still getting used to it and haven't got the hang of it past about 50 yards yet, but that seems to be mostly caused by spinning problems with the rounds when they depart the barrel.

If it's true that the measure of a man's intelligence is how closely he agrees with you then one of us is a genius. I think it's you BTW.
I've got all of them except the Browning.
If you get a chance to shoot a Mosin Nagant try it out. Cheap to buy, ammo is almost free and they're a hoot to boot.

SMLE
The No 4 is a better shooter.

If you reload, then either get a sizing die made for the chamber size of your rifle, or lap out a cheap die using fired cases held in a case holder with a scotch tape spacer on it. That will give you a few % more case capacity than a .308, in a case with the same internal diameter as a ppc case (less back thrust = less barrel whip = tighter grouping). The no 4 action is well capable of taking .308 pressures, and the 1:10" rifling twist works best with >170gr bullets.

If the bore turns out to be beyond redemption, re-barrel with .300 bore .308 groove, (I'd go for a 1 in 8 twist 3 groove, but that's personal)chamber it pretty much max size, substitute a .308 expander button in your dies and use the excellent choice of .308 diameter bullets.

Finally the lame owner of the derivative buyagunday.com gave up his registration and now both buyagunday.com and buyagunday.net share a common home owned by the creator of the holiday.

Hope to see you there and tell your friends.